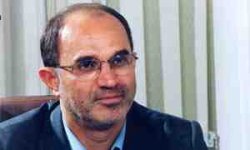 US Companies Invited to Participate in Iran's Oil Projects

Link and article to follow below. The Bullshit Curtain is so thick these days, getting at something resembling truth takes relying on smart back-channel people who know how to google for it in about 20 languages. This article should be front-page on every major newspaper in the country, and it's nowhere. I don't know Gholam Nozari from Adam, but he's one of the most important men in Iran, and he's saying all the US needs to do to get into Iran's oil game is not renew the (D'Amato) law which precludes it from doing so. This is very clever, win-win-win positioning by the Iranians, as Nozari himself alludes. They're using hidden US objectives to pressure all the other foreign oil companies in Iran into re-thinking their rate structures; they're baiting both BushCo and Congress to define oil partnerships as a quid pro quo in the context of nuclear energy negotiations; and they're pressing the Russians and Chinese to define their security relationship more clearly.

Speaking in a press conference here in Tehran on Monday, Nozari said Iran is prepared to work out economic and financial incentives for the American companies to participate in the Iranian oil projects, adding, "Although economic preferences are a top priority for American firms and companies as they are well aware of the excellent preferences that exist for their operations in Iran, this has actually been the D' Amato sanction Law of the US Congress which has impeded their activity in our country."

"Once the Law which is extended by the US presidents annually is ruled as null and void by the US officials, we are confident that many US enterprises will rush to Iran to enjoy the investment opportunities and preferences that reside already or we will create for them in here," he added.

The Iranian oil official stressed that under such circumstances, his company would certainly hold negotiations with the US companies to pave the ground for offering and attracting them with still more rewarding conditions and preferences that already exist in Iran.

He said partnership of the US oil companies can give rise to tighter competition in the Iranian projects and lower down tender prices and, meantime, affect current and future decision makings by the US politicians and statesmen.

That last paragraph is beautiful: "partnership of the US oil companies can...meantime, affect current and future decision makings by the US politicians and statesmen." This is how to negotiate. Nozari is what Tony Soprano would call "an Earner."
Posted by MarcLord at 5:56 PM