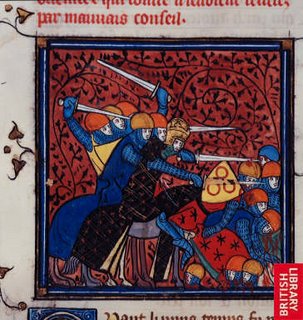 I Meant No Offence, You Godless Towel-Heads
I've always had a soft spot for the Catholic Church, in no small part due to past experiences with Catholic girls. In fact, "undying gratitude" is not too strong a term, and it's probably time to drop by the diocese across the freeway and write out a big check. Not being Catholic, I also have no need to dislike the Pope; he has yet to nag me with a single proclamation or hit me up for a donation. On top of that, when I was a junior in high school, my football coaches (named Precopio and Recesso, quite a pair) were staunch Catholics and made sure the entire team went to services the morning of a Friday night home game. So I have gladly taken communion in all seriousness, if not propriety.

Notwithstanding the above the new Pope left me feeling a little cold, and it wasn't the Hitler Youth thing, the anti-gay stuff, or the Bo Peep hook. All understandable. But now I'm starting to get why. The Pope started quite a flap with Islam this week. What the hell was he thinking? This is not Klaus the Retiree we're talking about, some fart laureate holding forth on a park bench over a case of Spaten beer bottles; the Pope has an entire staff of scholars which carefully vets his speeches for positive and negative effects. I have been described as a planter of verbal hand grenades, but can't make sense of this one. Riots ensued in places like Cairo and Istanbul, churches were fire-bombed in the West Bank. Muslim anger will be sustained over time, and Benedict is slated to make a peace tour (cough*ka-boom*hack) through a host of Muslim nations. Going forward, only a historian could love this.

Oh, the flap? In a speech to academics in Regensburg, the Pope used a quote from some 14th century crusade-era Persian emperor who called the Prophet Mohammed a violent, evil good-for-nothing bastard. Granted, Mohammed's doctrines of enlightenment and spreading Islam by the sword are a tad contradictory. But Catholicism was not exactly the May Queen in this regard, either, and the mound of heathen and heretic bodies piled up in its own past is impressively vast. When Charlemagne conquered Germany's pagans, Ratzinger's forebears, the method of conversion was gentle: bury a tribal elder up to his neck and say, "Be baptized or we play chuckers with your head." So a certain irony is apparent. And surely the Evil Bastard quote would've gone over a lot better if the West weren't busy invading the heart of Islam again.

Consider: let's say you're leading your spouse, your kids, and a troop of other parents' kids down the sidewalk. You see a very large steaming mound of fresh horse manure in front of you. Do you lead your charges directly through it, or do you take the humble, simple expedient of widely skirting the mound, warning those behind and waving the flies away? I want to like the Pope. I sense the fanned flames of a cynical press looking to start a fight to sell ad copy, so I went to read his entire speech. It was scholarly, well-meant, and in places even high-minded. But it was also muddled and self-contradictory, and sounds just proud and vain enough in tone to lead 1 billion followers through an ugly, steaming manure pile without apology.

Should my opinions above understandably offend any Catholics, I have two things to note, and respectfully request reflection upon them. First, because I am from the West and white, the Pope also represents me and mine, and he just made our lives and those of many followers of Christ more dangerous. Second, I can't imagine John Paul would've ever done this.
Posted by MarcLord at 2:33 PM

I am quite honestly happy he said the things he did. He is showing that he has the courage to confront the growing double standards of the Muslim world. Forced conversions by Muslims occur daily around the world, whereas if the situation were to be reversed the outcry would be tremendous.

The Communist Party of China had an interesting motto during the Cultural Revolution: describe a thing as it truly is. How can we attempt to understand the Muslim world if we are not willing to openly talk about the atrocities that are being committed in the name of that religion? You might be surprised how many Muslims continue to think any and every terrorist attack since 2001 has been carried out by the Jews and the CIA, and I'm not just talking about in the Middle East. On the other hand, there are no Christians that deny the Holy Spirit Movement of northern Uganda is a murderous, twisted -Christian- sect.

Sadly, we live in an age where we have to treat all beliefs with more than a few million adherents as religions equal with Catholicism and Protestantism. Thankfully, our forefathers didn't make the mistakes that we are making. When they went to China and saw the widespread mutilation of women through foot-binding, they said it was evil and lobbied to outlaw it. When the British saw Indian women jumping on the pyres of their burning husbands, they outlawed it. Today, we are not even allowed to say that Islam is a religion that practices widespread female sequestration and oppression. How can we understand anything of the world if we are not even allowed to describe it?

Hi, thanks for your insights. They're all true, but I'm not happy the Pope said what he did at all. He made a speech about primarily Western liberal cultural politics soon before he was to visit islamic nations. He had the opportunity to say "Look, we (Catholics) have made mistakes, but each soul is equal in the eyes of God, and we too are trying to work out how best to reflect that equality. Let's talk." Instead he sent a mixed message which betrayed what he really thinks about Muslims, rather than telling them what he really thinks and pointing out benefits of change.

Previously, Benedict relocated the Vatican's top inter-relgious affairs expert, Michael Fitzgerald. It was widely seen as a demotion, and the lack of Middle East expertise a reason that line made it into the Pope's public speech: