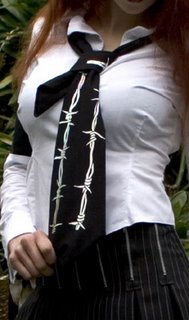 Guten Morgen: "Enhanced Torture Bill" Day
The wording of the Enhanced Torture Bill (ETB) looks like an in-practice license to torture Americans who talk to foreign muslims. It’s a more sophisticated version of the 1917 Sedition Act (also very fun reading, journalists were tried and sentenced under it, and it was never repealed); this time, Congress is segmenting off protections much like “discrimination pricing” segments values off as a marketing technique. The law is clear and fair: don’t have communications with anyone who communicates with foreign-born people who communicate with terrorists, and you’ll be just fine.

And don’t worry, if you make the mistake of supporting terrorists, habeus corpus is still there to protect you because you’ll be able to see the confession which was tortured out of you as the evidence against you in court. It’s the furthest thing from Stalinism, because your confession will be real, not forged. You will own it.

The New York Times and I haven't been on good terms for awhile, but here's a synopsis of what they're saying are the major problems with the ETB:

Enemy Combatants: A dangerously broad definition of “illegal enemy combatant” in the bill could subject legal residents of the United States, as well as foreign citizens living in their own countries, to summary arrest and indefinite detention with no hope of appeal. The president could give the power to apply this label to anyone he wanted.

The Geneva Conventions: The bill would repudiate a half-century of international precedent by allowing Mr. Bush to decide on his own what abusive interrogation methods he considered permissible. And his decision could stay secret — there’s no requirement that this list be published.

Habeas Corpus: Detainees in U.S. military prisons would lose the basic right to challenge their imprisonment. These cases do not clog the courts, nor coddle terrorists. They simply give wrongly imprisoned people a chance to prove their innocence.

Judicial Review: The courts would have no power to review any aspect of this new system, except verdicts by military tribunals. The bill would limit appeals and bar legal actions based on the Geneva Conventions, directly or indirectly. All Mr. Bush would have to do to lock anyone up forever is to declare him an illegal combatant and not have a trial.

Coerced Evidence: Coerced evidence would be permissible if a judge considered it reliable — already a contradiction in terms — and relevant. Coercion is defined in a way that exempts anything done before the passage of the 2005 Detainee Treatment Act, and anything else Mr. Bush chooses.

Secret Evidence: American standards of justice prohibit evidence and testimony that is kept secret from the defendant, whether the accused is a corporate executive or a mass murderer. But the bill as redrafted by Mr. Cheney seems to weaken protections against such evidence.

Offenses: The definition of torture is unacceptably narrow, a virtual reprise of the deeply cynical memos the administration produced after 9/11. Rape and sexual assault are defined in a retrograde way that covers only forced or coerced activity, and not other forms of nonconsensual sex. The bill would effectively eliminate the idea of rape as torture.

Update: German lesson for the day is "Jawohl, mein Fuehrerschaft." (Very well, my Presidency.) Actually the update is to give myself a Blogger Bad Practices award. I lifted the above NYT synopsis from one of the good commenters on an On-Topic thread by the incredible Christy over at FireDogLake, then hit the 'Publish' button before attributing it to them. This was in order to try and get a post up this AM and get Lord Baby out the door on time. Believe me when I say getting both done was a challenge. Lord Baby is a benevolent ruler, except when he perceives his total control over the known world is threatened. Then he turns into something like Arnold Schwarzenegger was in his movie "Commando," only he's three feet high, more elusive, and psychic. I got him to Day Care, but now have to go back and search whom to attribute the body of the post to before they find me, call me The Hunchblog of Ultra-Lame, or banish me to Blogsylvania. Apologies (not quite) in advance, plagiarized FirePup. I'll go back and find you.

Update: The synopsis was from BobbyG's comment #106 over at FDL on Christy Hardin Smith's post, "Well, Here's A Question." Christy is a former federal prosecuting attorney. If you want to know what's going on re: the ETB (a lot more than I'm telling you), go over there. She's on fire today.