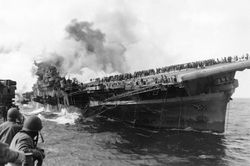 Israel has long been described in security circles as "America's stationary aircraft carrier in the Mid-East." Well, the hull is seamed and water is gaining on the bilge pumps. Here's what Ben Eliezer (former Israeli Defense Minister) had to say Wednesday:

Given the missed goals of Israel’s venture into the Lebanon war, it is no wonder that Binyamin Ben Eliezer, minister of infrastructure in the Olmert cabinet and a former defense minister, said bluntly Wednesday Sept. 6 that this was Israel’s worst defeat in all the wars it fought. Domestic criticism of the government spreads day by day as the bizarre, muddled and incomprehensible nature of the prime minister’s war decisions continues to mark his actions three weeks later.

Unlike the press here, where not even NPR reporting will put it this way, Israeli ground forces were soundly thrashed in Lebanon. It's being widely discussed as a defeat amongst Israelis for the following reasons:

1. Morale is very low over the two captured soldiers, since there has been no public evidence given they're still alive or in good condition. You'd think Olmert could've negotiated a Red Cross visit by now.

2. Hizballah is stronger than ever, still in South Lebanon, jubilant and armed to the teeth.

3. Olmert thinks UNIFIL-2's deployment South Lebanon achieves a stated goal of the invasion. Nobody else agrees, and Olmert and the commanding general of Israel's army are ready to kill each other.

4. UNIFIL-2 has been very clear that they won't disarm Hezbollah. Rather, participating armed forces have repeatedly insisted on defining when it's ok to shoot at Israelis. Seems like they remember how the IDF intentionally killed 4 UNIFIL soldiers with directed artillery fire while they were in a well-marked bunker.

In his directive for an updated National Intelligence Estimate (NIE) on Israel, the US president wanted to find out if the mismanaged Lebanon War was a curable hiccup or the symptom of a deeper malady. He asked whether Israel is robust enough to continue to count as a strong and stable political and military force able to serve the United States as a Middle East ally and a strategic mainstay in the region.

Just how bad would it have to be for Fartacus to question Israel's continued utility as a military ally? Whether an NIE was ordered or not, military advisors must've broken the news to BushCo that the IDF isn't strong enough to take on Syria. This is very inconvenient, as Syria was next on The List. It has to be knocked out in order to close the ring around Iran.
Posted by MarcLord at 10:32 PM

Was it listing or lisping? I think you attacking asymetery of the Israelli chromosomes.

Though I strive to maintain a tolerant, even internationalist, blog, English is the preferred method of discourse here and I respectfully request you employ more of it. That said, there is nothing so asymmetrical about the chromosomes in question that re-uniting them with Ishmael wouldn't straighten out.