Rilke: Fall Day
Summer in Seattle has grown lackadaisical this past half decade, arriving late after a listless don't-plant-tomatoes Spring, then coming on fast, staying sunnier and hotter than the slugs can stand, then lingering long. It didn't really leave here until this weekend, and that distinctive change of seasons feeling I've long associated with football, and is closely tethered to the sensation of lying down in a muddy or even flooded field and stretching, has arrived like a linebacker diving into a blocking dummy. It's in the joints and the bones, in the muscles and the glands, and these call up consciousness. They call up thoughts of tangy cider made from frost-sweetened apples, and gallons that need to come home.
By assumptive agreement or ancient reflex, or possibly the marital telepathy couples can develop, Lord Wife and I invited friends over for dinner for last night, then went shopping for lamb. It was lichen-fed Icelandic lamb and I got a whole leg of it, something that doesn't happen every day or year. Fit for a Viking feast cooked slow with salt and fennel, served with wine plundered from the south of France. Rilke, master of his craft, wrote about the compelling feeling of seasons lost and impending, and the available translations into English in no way conveyed his power nor maintained his rhyme and cadence. So I gave it a go:
Lord: it is time. The summer's gone, you know.
Send shadows long over the sundials,
and loose thy winds across the meadows.
Let each fruit swell full on tree and vine
and send us yet two more southerly days
for urging consummation, to chase
the last sweet drops into heavy wines.
He who has no house now builds no better.
He who is alone will long stay so,
will sit, and watch, and write long letters,
and in the lanes will pace to and fro,
restless, as the dry leaves blow.
Posted by MarcLord at 10:46 PM 76 comments: 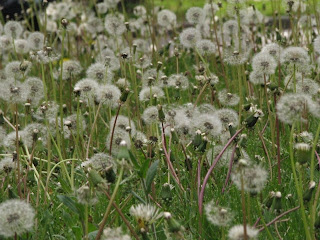 When Diplomacy Won't Work
There’s a turf war going on in my yard.
Dandelions are crowding out grasses
with their unauthorized settlements
of fat sprawling leaves. They've set
up dictatorships commanding
all subjects to wear yellow turbans.
I am determined on regime change,
having been influenced in favor
of green by pretty catalogs from seed growers
makers of fertilizers and weed killers.
But I am constrained from chemical warfare
by a higher authority--my wife--and her allies
the deer, who are neutral, nibbling equally
on both sides, and the salmon who swim
around in the saltchuck at the end of our street.
The dandelions have learned to keep
their heads down during mower assaults.
I've lowered the blade in retaliation
but the enemy counters by early ripening,
releasing brigades of midget paratroopers
to spread terrorist cells wherever they land.
Collateral damage body count averages
six slugs per skirmish but I say if the little
buggers can't get out of the way
they deserve what they get.
I have a plan.
I will raise the debt ceiling and mobilize
a children's army to dig up the dandelions,
a nickel a pop. It will be a holy war.
When the number of holes
exceeds the number of dandelions,
I will know I am winning.
In the end, I will win.
God is on my side.
Posted by MarcLord at 3:09 PM 8 comments:

Syria Is Going Up...
And I could go to the chalkboard and write out the geo-calculus, but choose to spare us both. If you think instability and region-wide wars in the Arabian Peninsula or maybe wars spanning the world are bad, then it's bad. Or, if you dislike seeing peaceful demonstrators dispersed with machine gun fire, it's bad that way too. Which is what's on this video, and why Syria shut down their internet to keep the official world from seeing its murderous badness.
I'm working on a post about how the collapse of the global financial system crafted 30-odd years ago is linked to food hyperinflation and the revolt of much of the world's non-rich. Also, Israel and the US are planning to strike Iran's nuclear facilities in July or August. No links, no sources, but the chalkboard has grown a bit full.
Syrian leadership may be forgiven for having a poor understanding of how digital media proliferates around their edicts, but they certainly understand corruption, and seem to know that CNN producers repackage their news from Google searches and have the attention spans of salt and vinegar potato chips. So this may or may not hit the MSM anytime soon.
The Assad Part Deux regime may have 6 months left, give or take, and the "How to Buy Some Time" section of their playbook is now being heavily scrutinized. Torture, machine-gun, placate, and then buy off? Or buy off, placate, re-machine-gun, and then flee? So many children to beat into informing on their parents, so little time. Fortunately, I don't care, because my masters in the Empire have finally given me this:

Schrodinger's Terrorist
In 1935, Edward Schrodinger conceived a thought experiment to point out the incompleteness of current quantum mechanics. If a live organism was put into a sealed box, and then the principles used to describe subatomic particles were applied to said organism, it would, probablistically speaking, be both alive and dead. You really can't tell until you open the box. For this symbolic paradox, Schrodinger chose a kitty.
The Obama Administration recently declared Osama bin Laden dead, offering mathematical proofs instead of opening the sealed box. For domestic political consumption, assuming a re-election is intended, this is an elegant solution. For military policy, it only has value if victory is declared and intent to pull out is demonstrated with fair rapidity. It surely gives admirable leverage to that end, yet if unused, the value turns vengefully negative.
A handful of Taliban just besieged a naval base in Karachi. They kept it up throughout the night, even destroying US drone aircraft, citing as their motivation the violation of Pakistan's sovereignty in whacking the Cat. With that attack, not to mention others, the cracks in the US-Pakistan alliance have riven into gaps. In the morning, Pakistan announced China is going to turn the commercial port of Gwadar (in Balochistan, 70 kilometers from the border with Iran) into a naval base as part of a "string of pearls" strategy to protect oil imports.
The US badly miscalculated its bin Laden mechanics. With no signals forthcoming as to a draw-down, Pakistan must actively seek allies with better chances of keeping its own domestic pressure cooker from turning into steam and shrapnel. Pakistan needs oil, it needs food, it needs to maintain balance of power versus India, and it will find them from less toxic and far more proximate benefactors.
Posted by MarcLord at 10:38 PM 61 comments:

Regina Spektor: Blue Lips, Song and Lyrics
He stumbled into faith and thought,
"God, this is all there is?"
The pictures in his mind arose,
and began to breathe.
And all the gods and all the worlds
began colliding
on a backdrop of blue.

He took a step but then felt tired.
He said, "I'll rest a little while."
But when he tried to walk again,
he wasn't a child.
And all the people hurried fast,
Real fast, and no one ever smiled.

Blue lips, blue veins...
Blue, the color of our planet from far far away.

They started out beneath the knowledge tree.
Then they chopped it down to make white picket fences,
and, marching along the railroad tracks,
they smile real wide for the camera lenses.
They made it past the enemy lines
just to become enslaved in the assembly lines.
Posted by MarcLord at 11:01 PM 2 comments: 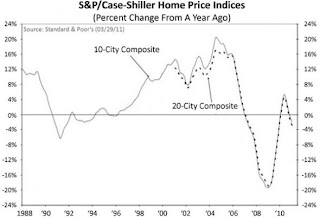 Case-Schiller Housing Price Graph
We like our house and will never flip it unless a nice couple in Paris or Denmark wants to trade.
Posted by MarcLord at 10:42 PM 1 comment:

The Battle of Chernobyl
Can't seem to write anything about the Fukushima disaster yet. This documentary tells the hair-raising story of Chernobyl.
Posted by MarcLord at 3:47 PM 14 comments: