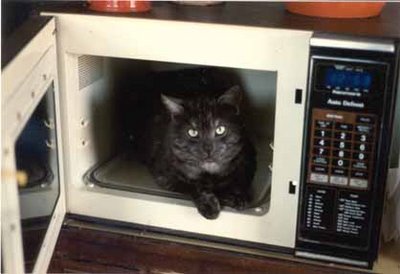 I Mean, What Could Possibly Go Wrong?

WASHINGTON (AP) -- Nonlethal weapons such as high-power microwave devices should be used on American citizens in crowd-control situations before being used on the battlefield, the Air Force secretary said Tuesday.

The object is basically public relations. Domestic use would make it easier to avoid questions from others about possible safety considerations, said Secretary Michael Wynne.

"If we're not willing to use it here against our fellow citizens, then we should not be willing to use it in a wartime situation," said Wynne. "(Because) if I hit somebody with a nonlethal weapon and they claim that it injured them in a way that was not intended, I think that I would be vilified in the world press."

The Air Force has paid for research into nonlethal weapons, but he said the service is unlikely to spend more money on development until injury problems are reviewed by medical experts and resolved.

Nonlethal weapons generally can weaken people if they are hit with the beam. Some of the weapons can emit short, intense energy pulses that also can be effective in disabling some electronic devices.

Ummm...yes. I seem to recall tests of a microwave beam weapon which makes an unruly crowd member feel as if his or her skin is being burned off. (Mainly, because it is. By a microwave beam.) Well, it's only a focused 95-Gigahertz beam, which isn't enough to cause permanent damage. Unless some unappreciative trouble-maker gets caught in it for about the time it takes to write this sentence. Fortunately, the idea is to rely on the weapon operator to turn the beam off or away from you soon enough to not do lasting damage. So it's perfectly safe. Just needs a little more fine tuning, is all.

Still, I'm confused. I think this Air Force guy is saying he's scared what other nations will do if we use the Burn Blaster on their people and some of them get hurt...so to avoid a PR hassle we need to use it here first, where it's not such a problem if something goes wrong? Forget everything I said in my post yesterday. Everything's going to be just fine because we're going to stop pissing off other countries by zapping them with unproven weapons. In fact, go max out a credit card or two.
Posted by MarcLord at 8:05 AM