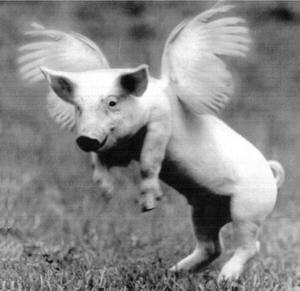 This Is Encouraging...
On the subject of torture, I want to go on the record. If a suspected terrorist or enemy soldier ever falls into your hands and you need the truth out of them, here is what you must do: feed them, get them high, and get them laid as quickly as possible. They'll tell you everything they know in short order, and no phony stuff about their cousin being a Mossad double-agent, either. And if a nuclear bomb is going to blow up your city in two hours, trust me here, Bruce Willis is just an actor and torture isn't going to save you anyway. If you stick to getting information the right way, at least you'll still have an enjoyable time and maybe build up some good karma.

Colin Powell wrote a letter to John McCain yesterday. He notes that continuing to torture our enemies will hurt our soldiers and make people question our national sexual orientation. (Better late than never, Colin baby! What's a matta, the $100k-a-pop lecture circuit drying up?) All the previous moral dissonance which kept his mouth shut now swept aside, this is a fantastic sign if you're sick of sadomasochistic military policies. In my book, torturing insane people and then taking what they tell you as gospel, well that clears the sadomasochistic bar. Gotta be something wrong in your mind or your body if you're pulling that stuff. But I digress. My point is, if the career spokesgeneral who covered up the My Lai massacre for the army is sticking his neck this far out of his shell now, is it because he thinks it's finally safe to do so? He didn't even send the letter to the White House first, so that's a little ass-moon he threw in extra. I know a lot of you like Powell cuz he's so darned likeable. Sorry for taking the shot at him. I like him, too, really I do. Especially now.

John Warner, Republican chair of the Senate Armed Services committee, voted the Preznit's Torture Bill down (it passed the House). Bravo, Mr. Warner. That took guts, and he has stood against the Preznit on this same principle before. 4 other Republicans joined him to throw the bill back 15-9. The best support the White House could manage to get came after waterboarding a few of the Pentagon's top military lawyers. The lawyers were then willing to sign a letter saying 'they "do not object" to sections of Bush's proposal for the treatment of detainees.' They had refused to sign a previous version of the letter, and threatened to resign.

Victories are sweet, and this is one for our country. We know the Bush Administration is going to go ahead and do what it wants anyway, and the pig ain't flying yet. But it's trying. It's trying.

Update: Reader Al C. pointed out that there's one less fluttering pig than I had counted last night. Only a total of 4 Republican Senators on the Committee on Armed Services voted against the Enhanced Torture Bill: Warner-VA, McCain-AZ, Collins-Maine, and Graham-SC. 13 Pugs and 11 Dims. Man, there's some real winners on the Red side of that committee. Planet Xenophobe.
Posted by MarcLord at 6:42 PM