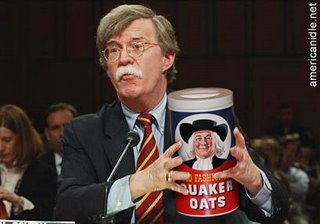 Alrighty then, let's parse that language and try to translate it, going from back to front, starting with "...sanctions that don't adversely affect the Iranian people." Hmmm. That's a tough one. Well--quite a few Iranians are certainly suffering from undiagnosed or inoperable cancers, and radioactive fallout would cure a significant percentage of them. So that group will definitely come out ahead!

No, no, clearly while John is going to enjoy punishing particular Iranians for their intransigence, he bears no grudge against the little muslims in Iran, rather as he puts it, we're looking for "sanctions that...target the leadership and the riches they've accumulated." Ok, now that's an easy one. He might as well have said, "We are currently working on a Freeze and Seize sanctions package with the other Security Council members that will make the mullahs scream for mercy."

Now we're getting somewhere with that central sentence. It's not about nukes. It's about juice. About getting with and staying with The Program. I mean, who here has ever watched The Sopranos? Look at it like Tony (Soprano, not Blair) would: if Iran just stops pricing its oil in Euros, drops its fucked-up pretensions to independence and influence, and ponies up some serious cash or access, Tony would forget about Iran's disrespect in about 10 minutes of screen time, sell it a nuclear arsenal, and say "Alright, if you'da jus tole me you felt so strong about Israel before, I'da done em for ya." Admittedly, the players in BushCo make Tony Soprano seem about as threatening as a labrador retriever, and his ethics those of an honest businessman. But the analogy holds. Let's face it, some of these tools would blow up the moon for a few billion worth of gold bullion. (I name the amount and material carefully. Although all-important Fall ratings might improve, I think we can agree it would be a VERY bad idea to test this proposition.)

This essential conflagration on the road to redemption, to steal Bill Moyer's phraseology, is about money. Actually it's more about oil, because money is replaceable. Oil isn't. Yet as devoted viewers will recall, during BushCo's first season, Saddam Hussein didn't last too long after he started pricing his oil in Euros in the last 2000 episode of Baghdad Moves to Euro . In this season's cliff-hanger, Iran is impudently operating without a license on Cheney's turf and not paying up, so he has to decide whether they should be tortured into compliance, or whacked, or both. Yet all is not bliss in BushCo. While eager to put a hurting on Ahmadinejad, some questions have arisen about Olmert the Enforcer's abilities. Trusted captains have formed misgivings and have begun, reluctantly, to counsel caution. Stay tuned.