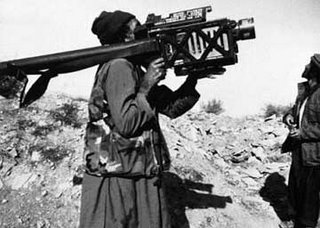 But They TOLD Me It Was Cleared For Carry-On!
Behold the weapon that drove the Soviets out of Afghanistan. Starting in 1986, the US supplied a couple thousand Stinger missiles to what were then affectionately known as "freedom fighters" in the US press, and hundreds of Soviet helicopters were downed in short order. Relatively cheap and portable (by donkeys and pickups, at least), control of the battlefield rapidly passed to the Stingers.

I've often wondered why Iran hasn't sold more of its SA-7 Strela surface-to-air missiles (SAMS) to various groups in Iraq or Afghanistan. These missiles were effective, maybe even decisive, in Lebanon for their ability to hold Israeli helicopters at bay, and there is recent evidence a few have already been used in Iraq to shoot down a few coalition helicopters. According to diplomatic sources, Iran is further supplying Hezbollah in Lebanon with a variety of SAMs, most of its own manufacture. Here's some further light reading on some of Iran's current missile technologies.
Posted by MarcLord at 3:05 PM