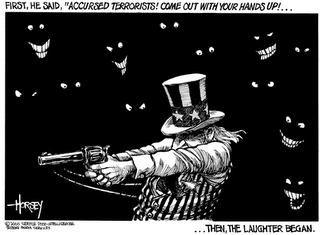 America the Vulnerable
Somewhere today, the BushCo message machine (a/k/a "The Mighty Wurlitzer") is on rewind, and a few hundred writers are trying to fix the world with speeches, skimming unsure fingers across keyboards, doodling on yellow notepads, tearing off sheets and wadding them up and throwing them at wastebaskets, saying things like, "No! I've got the angle now!" The anniversary is coming right up, and they need to write something, anything to bring everything back into line. Poor bastards. They're trying to fight a dynamic as strong and as old as the hills, and they're on deadline. They will fail to say anything helpful, or anything honest. They will fail to lie well, and they'll even fail to horrify.

I remember the eleventh of September, five years ago. I had been expecting it, and even drove up the West Side Highway past the Towers before it happened. The collective American psyche had been expecting it, and knew it was coming for fifty years. You don't drop nuclear bombs on hundreds of thousands of women and children without payback coming sometime. The world never worked that way.

Something inside us fights and claws to get to the top of the hill. To get there, we have to knock someone off, and we have to use something bad to do it. Once we're up there, we knock others back down because something tells us we have to. You trump the jawbone of an ass your predecessor wielded with a sharpened copper axe. Eventually some wise guy gets tired of you, invents a bow and arrow and shoots you with it. That's how the world works, and we are right to fear it. That's why Tom Clancy books like "The Sum of All Fears" sell millions of copies, and that's how Peggy Noonan (she who wrote the "thousand points of light" speech for Poppy Bush) felt it coming and wrote this in 1998:

"...I think of the friend who lives on Park Avenue who turned to me once and said, out of nowhere, "If ever something bad is going to happen to the city, I pray each day that God will give me a sign. That He will let me see a rat stand up on the sidewalk. So I'll know to gather the kids and go." I absorbed this and, two years later, just a month ago, poured out my fears to a former high official of the United States government. His face turned grim. I apologized for being morbid. He said no, he thinks the same thing. He thinks it will happen in the next year and a half. I was surprised, and more surprised when he said that an acquaintance, a former arms expert for another country, thinks it will happen in a matter of months."

I remember the eleventh of September, five years ago. I had been expecting it, just not the way it came. It's hard to expect 19 unemployable, heavily accented losers who can't even fly a Cessna for shit to defeat NORAD, the FAA, and the US Air Force. And I'm not so sure they did; maybe their last day was their luckiest ever. Either way, I felt helpless in the aftermath, not because they finally got their targets. (We were lucky their weapons weren't what we would've used had we been in their place. What we had been expecting.) Rather my helpless sinking feeling was for the response that was sure to come, which would harness a lifetime's worth of paranoia, guilt, entitlement, triumphalism, self-righteousness, and sheer murderous ignorance. The worst impulses in us, of which the past five years have failed to disappoint. How to stop that I didn't know, not then and not now, but I love this country and would've done something if only I knew how. All I know is that our government keeps standing defiantly on top of a hill it can no longer hold, and there are more and more arrows sticking out of it.

There is another choice. It merely requires marching back down the hill and seeking medical help while there's still time. Are we exceptional enough to do that?
Posted by MarcLord at 12:43 PM