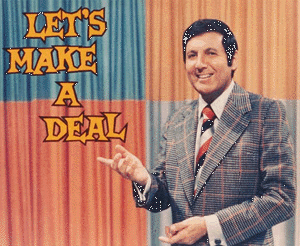 Let's...Make...A Deal!
So, I was driving down the street early this evening listening to NPR. Over the screams of my wife and son (I sometimes drive a tad aggressively, so my wife gets nauseous and my son gets joyful) I made out a live report from Ted Koppel in Tehran. As in, Ted's in the capitol city of Iran. I couldn't quite hear what he was saying, but thought to myself over the screech of family and melting tires, "Hmmm, why would Ted Koppel be in Tehran?" I smell a deal. Somebody tipped Ted's bosses off that he should have his butt reporting live there, as our preznit and Iran's traded insults at the UN.

We're hated for our freedoms, cha-cha-cha.

Poker players and game show contestants want to keep going until the other players have no money, and they have all of it. Both the US and Iran benefit from the US being in Iraq, and the game conveniently goes on. It's no-limit betting, the pot is big, and Iran has even started to think it's going to be the House. So all the stuff about nu-kyu-lur weaponry is a ridiculous smokescreen. Nukes are a possible end, and gunfire has been known to erupt over poker tables, but this is more like a bunch of Texas Hold 'Em twits who wear their tough sunglasses under casino lights and keep a chrome-plated Beretta in their hotel room. The pupils of the eyes are the easiest tell, so the sunglasses are for the game; the gun is for when it's too late. Of course the smart thing for most gamers is to walk away from the table or from Monty Hall with their money, but hardly anyone does that.

I could be wrong. Very well could be. I'm not going to even try to support my position with sources and links because this game has been going on from now back to holidays in Afghanistan through T.E. Lawrence in Baquba to Marc Anthony and Cleopatra huffing naptha fumes. But the outline of the desired deal with Iran could look like this:

1) partition Iraq into a federation with three states along its natural fault lines, and jointly ensure their sovereignty.
2) Assist Iran with (US-supplied) nuclear energy production in exchange for oil lease contracts, cooperative non-violence, and implicit allegiance.
3) Call off the NATO blockade, the one which would be completed when the fleet and ground forces parked in the eastern Med invade Syria, and use Iran to solidify the US hold on Pipeline-istan (Caspian Sea hydrocarbon resources and Afghanistan pipeline routes).

It's what I would do. It would rein in Russian and Chinese energy ambitions in the Oil Triangle for a while, but allow them a controlled minority position. Either way, I'm fairly confident (but, unfortunately, Ted, am in no way certain) the White House wouldn't drop a nuke onto a loyal terrier's toupee-ridden head in Tehran. That's the good news. The not-so-good news is BushCo wants all the money, and Iran's pot has gotten bigger. BushCo still wants regime change in Iran, and is trying to "spread democracy" there, too. NATO is in Afghanistan now, right on Iran's border, and Special Forces units are on the ground in Iran. So the game isn't going to stop. But ever since Reagan, US military doctrine is to only invade or bomb countries that can't defend themselves, and Iran definitely doesn't fit that bill. And even the toughest games eventually break for dinner and a bathroom trip. Heck, maybe even for a commercial.
Posted by MarcLord at 11:03 PM