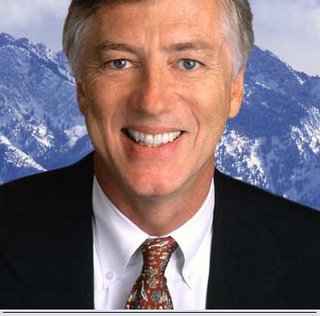 QUICK, GET A COMPASS

Meet Rocky Anderson. Behold the face of a traitor. Rocky is guilty of treason against the United States, and that's fine because he's a Democrat, except whoops, he's also the mayor of Salt Lake City:

A crowd of thousands cheered Salt Lake City Mayor Rocky Anderson for calling President Bush a "dishonest, war-mongering, human-rights violating president" whose time in office would "rank as the worst presidency our nation has ever had to endure."

What's wrong with this picture? Thousands cheering treasonous words. By the mayor. Salt Lake City is the capitol of Utah, which some of you may know as The Fifty-First State, and the reddest of the red states. The John Birch Society is still popular there, and Salt Lake is the Mormon Mecca. When Boosh went to Salt Lake, took something to calm himself down then bravely struggled to enunciate a prepared speech to the American Legion (cough*fascists*ahem) about something called "is-lame-o-fascism," and "tola-tera-tera-to-totalitarians," , Mayor Anderson took it upon himself to lead a big anti-war rally. And that's just spooky.

Now, being a former Mormon in good standing, I knew, or at least I thought I knew, Salt Lake City pretty well. And lemme tell ya, when the mayor of Salt Lake goes and leads an anti-war rally, any anti-war rally in any shape or form, you'd better go check the nearest compass. On the earth I used to live on, a Republican Administration could be carrying out a Global War on Puppies, and if the mayor of SLC dared criticized it, in public no less, the Mormon Church would round up the Elders to pay that mayor a little visit. That didn't happen, so the magnetic polarity of the earth may have just changed. It did so for the Bush Administration, because yesterday in Salt Lake City down went up, and up went down.
Posted by MarcLord at 4:41 PM