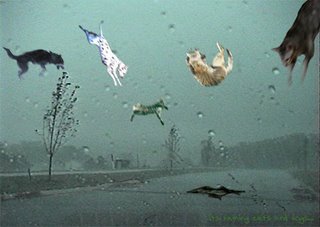 Nasrallah For Prime Minister -- Of Israel
This is too good to not share. Nasrallah, chief of Hezbollah in Lebanon, did such a good job throughout the recent war that he's being recommended in the press to replace Israel's own prime minister (Olmert). Ha'aretz, Israel's largest daily newspaper, has a cracking good online journalist named Bradley Burston. I'm not sure why, because his name is about as Semitic as Lawrence of Arabia. However, it's much easier to understand why he calls his blog "A Special Place in Hell." Bradley's opinion piece of the above title has gotten picked up by World News and other international newspapers. Here's part of what he had to say:

If nature abhors a vacuum, imagine how it feels at this point about Israel's senior leadership.

The titular head of state, our model for probity, is looking down the barrel of rape charges. The army chief of staff, our model for dedication and sacrifice, took a break for a bit of financial planning just as the nation's leaders were deciding whether the military was ready, plans, supplies, training and all, to go to war.

The justice minister might have helped Olmert this week, had he not resigned over suspicions that he forced a French kiss on an unwilling young woman soldier.

Humph. That's fucked up. Of course it sounds like a fairly normal month here, only with greater accountability and a slightly less supine press. A few weeks ago I wrote that fallout from Israel's defeat wouldn't be long in coming. I've never been a habitual reader of Ha'aretz, but have been going there to check for cats and dogs falling out of the sky. Here are the first few. More developing for the next post.
Posted by MarcLord at 9:00 PM