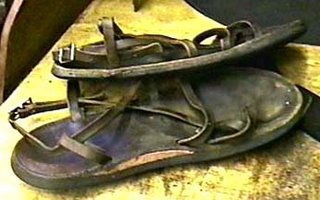 Pontiff Part Deux
An obviously intelligent and well-spoken but anonymous person commented on my last post. Whoa! Weird how such folks could possibly find their way here, but it's happened a few times and it's always flattering to get an insightful, well-supported comment. (Thank you, anonymoose.) The upshot was they are glad for the Pope's recent statements because it's better to call out Islam for its perpetuation or allowance of cruelty to various groups like women. I'm inclined to generally agree, particularly because some of the gruesome things perpetuated by branches of Islam make me want to clean and load my deer rifle. But I'm still not glad. Very un-glad. The comment forced me to better think about why I wish His Eminence had the good sense to keep his trap shut over that one quote about Mohammed being evil; first, a great deal rides on how you call something bad out, and there's not a lot of negotiating upside there.

Beyond that quote, the rest of the speech was a call for more patience and consideration for faith, tempered with tolerance, in public dialogue. Which is fine. The thing that worries me, which "I Meant No Offence, You Godless Towel-Heads" meant to convey, is how easily you get a sense from the speech and its regrets of what the Pope, the bureaucrats around him, and thus a substantial portion of their billion followers really think about Islam. At best it sends a mixed message, which doesn't accomplish anything. At worst it comes off as high-handed, intrasigent, and hypocritical. At worse than worst, it was condescendingly naive to a stunning extent. I think this last possibility is the strongest likelihood and most bothersome. Some Church leaders went on record to indicate what the problem might be:

“They have nobody to really ask,” said the Rev. Thomas Michel, secretary for inter-religious dialogue for the Jesuit order of priests. “Whoever looked at it and let that go through is someone who doesn’t understand Muslims at all.”

In February, Benedict reassigned the Vatican’s most senior Arab expert, Archbishop Michael Fitzgerald, then the head of inter-religious dialogue, to Cairo as the Vatican envoy there. The move was seen at the time by some church experts as a sign of Benedict’s skepticism about the value of dialogue with Muslims.

“I think one may say, if it is not too impolite, that it is time to bring back Monsignor Fitzgerald,” Mr. Melloni, the Vatican scholar, said.

If you read the full NYT article at the link above, you'll notice that a nun and her bodyguard were shot to death over the weekend. Causality or causuistry? You be the judge, but I think a telling problem is emerging. In toto, the Pope seems to be out of his element when it comes to the Mid-East, does not seem to be truly focused on a solution, and his going there will likely add to our immediate troubles. The root cause of the problem may be that he seems to lack the air of true humility so inherent in John Paul. Prada shoes are more his line. (No, really, they are.)

We can probably agree that more condescending naivete is not what we need for engaging Islamic leaders in positive dialogues. It sure wasn't what we needed for invading and pacifying Iraq. Give me anyone from Lucretia Borgia to Albert Schweitzer so long as they can negotiate well and come up with constructive solutions. And while we're at it, here's what I think we should look for when shopping for a Pope: ideally we want the guy who wears those sandals above. We want "The Shoes of the Fisherman." Failing that, we'll take a sincere and humble old Polack. (John Paul was the first pontiff to ever visit a mosque back on his 2001 visit to Syria.) Good managers come up with workable solutions to complex problems, the Clash of Civilizations tends to be a bit on the complex side, and poor managers get a lot of good people hurt.

One thing I do know. Good managers, and good leaders, pretty much always start off by moving things in a good direction. This isn't it.
Posted by MarcLord at 9:31 PM