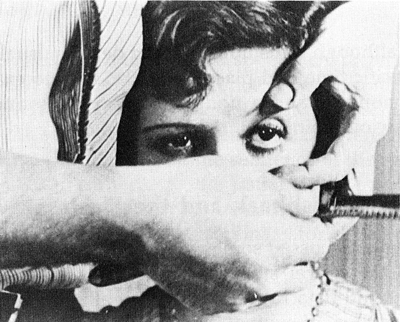 Don't Know About You, But I Am Un...Chien On Delusion
A NYT article about Dick Cheney last night claims he's losing it:

Measuring the accumulation or the erosion of power is an imprecise art. But interviews with more than 45 people over the past five months — including current and former White House aides, foreign diplomats, members of Congress and confidants of Mr. Cheney — painted a picture of a vice president who, while still influential, has seen his power wane.

Most agreed to speak candidly only if their names were not used. Mr. Cheney himself declined repeated requests for an interview. Instead, his office encouraged Ms. Rice and Mr. Hadley to give interviews to dispute the view that Mr. Cheney’s power is in decline.

The article provides a surprisingly good brief on the mechanics of that "decline," noting how the indictment of Cheney's aide Scooter Libby weakened lobbying and internal security functions. Of course, the article's timing is safe, because last week we saw the first real confirmations of a shift away from the Neo-cons. First, the Senate Intelligence Committee emerged, turtle-like, to state pre-war intel on Iraq was a hoax (never mentioning their role in it). Then another Senate committee failed to confirm John Bolton, Cheney's enforcer. So suddenly everyone is feeling frisky, but not bold enough to go on the record against Cheney, who may not be as influential but is every bit as dangerous.

And from his appearance on Press the Meat this morning, The Debaser is being allowed to retract his oft-repeated earlier claims about about Iraq's connection with 9/11 without any explanation or apology. Russert gives him a pass and a pat on the butt. Guess we'll have to wait for the Sixth Estate (comedians like Jon Stewart and Steven Colbert) to dig up the old clips and quotes for a compare-contrast.

The title of this post first refers to the surrealistic 1928 French film "Un Chien Andalou" by the influential Spanish auteur Luis Bunuel. In a precursor of post-modern politics, the film starts off with a scene in which an eyeball is being cut open. The Pixies, one of my favorite bands, did a 1989 punk song about the movie called "Debaser," and they change the reference slightly to "I am un chien andalusia" (I'm an Andalusion dog.) It seemed natural to take the phrasing a little further.

I am un chien Andalusia (x3)

Wanna grow
Up to be
Be a debaser

VERY INTERESTING,
YOUR MUSICAL TALENT IS SHOWING!
THE ONLY GOOD THING ANYBODY SEEMS TO HAVE TO SAY ABOUT BUSH IS THAT HE IS PREVENTING CHENEY FROM BEING PRESIDENT.