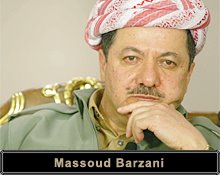 Iraqi Civil War, Official Start Date
It's been obvious for a long time that Iraq would devolve into civil war. As in, it was almost a foregone conclusion even before "the Coalition Forces" invaded. Right up until the bombing started, Saddam didn't fear a US invasion. He still had his forces prudently positioned against Iran, Kurdish separatists, and domestic Shiites.

For those of you who watch the news and see the subject brought up by airbrushed morons or artfully avoided by people with stars on their shoulders, you can stop now. The need for debate ended on Saturday. I had hoped to kick off the civil war myself by announcing it this week, but the Kurds beat me to it. The Iraqi civil war officially started on Saturday, September 2nd, 2006, when Massoud Barzani (the be-toweled dude pictured above) passed down an edict to stop flying the Iraqi state flag. I mean, look at Barzani. Isn't he just a big teddy bear? Go ahead, give him a big hug. Remember Fort Sumter, in the War Between the States? First thing the Southerners did was take down the Stars and Stripes and run up Ol' Dixie. I realize the nattering nabobs of networktivity have to fill a lot of airtime, but the case is closed. The Kurds just said they're no longer part of Iraq.

The neat thing about this is, Kurdistan has the most oil in Iraq, and also the closest thing to a real army. They're sure going to need both. The fulcrum of the conflict is in Kirkuk. That's where the oil nexus is and where the serious war will start. Logic dictates the US will back the Kurds to keep Turkey and Iranian proxies (amongst others) from invading them, but logic has been having an off decade, so you never know.

The Kurds are taking their time. They're saving up billions of dollars, building a massive military force, and de-Arabising the north. When the time comes for them to declare independence--and according to a referendum in which 80% of Iraqi Kurds participated, 98.7% do indeed want independence--they will do so, and there is nothing anyone will be able to do to stop them. There will be no fighting because the Arabs would have no means of doing so.

The rest of the comment also correctly notes I make it sound like rejecting the flag happened all at once. It didn't. And agreed, the Arabs have no means of fighting the Kurds army-to-army. But that doesn't mean that fighting hasn't already occurred, or won't keep occurring, on less classical terms. My main assumptions are that the Kurds will take the oilfields west of Kirkuk in the short term, an act which meets my definition of a Civil War. As does a Sunni yet again blowing up the oil pipeline which crosses the Kirkuk province. In the long term, everyone around the Kurds will covet what they have, and I believe over time they face a tough go of it against Turkey and possibly Iran, with a lot of continuing low-level guerilla conflict against Sunni Arabs, and probably Shiites. In military terms, if you can't get the oil you deny it to your enemies, and it's much easier to blow up pipelines and facilities than it is to protect them. It kind of depends on your definition of Civil War, but the Kurds are now aggressors, and have been since they signed an oil drilling deal without anyone's approval last December.
Posted by MarcLord at 8:51 AM

It's amazing how little truth is being reported in this whole flag mess. Southern Kurdistan ('Iraqi' Kurdistan) consists of three provinces. In two of those provinces, Duhok and Hewler, the Iraqi flag has not been flown since 1991 when the Kurds established control over their own territory. Likewise, the flag was not flown in Suleimaniya (the other city) until 2003 with the hopes of a united, democratic Iraq. Even then, the Baathist flag was only flown in a few places in Suleimaniya. Barzani simply banned the Baathist flag because the image offended almost every Kurd that saw it. The Baathist flag was plastered to the tanks that crushed their men, women, and children. Talabani (who controls Suleimaniya) has even supported this decision, because he knows that 99% of Kurds want the Baathist flag banned.

There will be no civil war between the Arabs and the Kurds. The Arabs have no means of fighting their Kurdish neighbors. There are over 200,000 peshmerga in northern Iraq. That's more than the rest of Iraq's security forces combined. And I haven't even mentioned the fact that the Kurdish peshmerga are the only viable security force in Iraq capable of fighting without coalition assistance. They retook Mosul when it fell to terrorists and they participated in the invasion of Falluja.

The Kurds are taking their time. They're saving up billions of dollars, building a massive military force, and de-Arabising the north. When the time comes for them to declare independence--and according to a referendum in which 80% of Iraqi Kurds participated, 98.7% do indeed want independence--they will do so, and there is nothing anyone will be able to do to stop them. There will be no fighting because the Arabs would have no means of doing so.

Thanks for the comment. So, just what is a peshmerga? Well, I know that much, but obviously you've followed the chess pieces there much closer than me. As I recall, a Scandinavian oil company starting spudding in northern Iraq late last year, so going off that I really do think the Coalition will protect the Kurds. Not that they need it short-term. They do need it long term, however, definitely from Turkey, possibly Iran. They've got not only the best oil, but the best water around. I'm long past hoping for any sensible military moves out of the Bush Admin...they have such a messy way with things. So what do you think Turkey's best next moves would be? And with whom am I commenting?

The three oil companies that have publicly stated they are working in northern Iraq are DNO (Norwegian), Western Oil Sands (Canadian), and Sterling Oil (British). All of these are quite small except the Canadian company, but there are other companies doing more clandestine exploration work right now. All companies involved in Kurdistan's oil industry are in the exploration stage right now except DNO, which should begin pumping oil by the end of the year.

It's definitely an interesting topic. The Kurds are trying to reclaim Kirkuk. Kirkuk sits on what may be the second largest oil field in the world. Proven reserves are 10 billion barrels of oil ($600 billion worth), but recent exploration activities indicate total reserves are close to 40 billion barrels. The Kurds are allowing foreign companies to begin work on the northern reaches of Kirkuk province (which is not officially under Kurdistan control). As you can see, the stakes are high.

Peshmerga are the fighters that began uprisings against Arab rule during the 1960s. They are mountain warriors that have constantly been fighting since that time. Iraqi Kurdistan, as they call it, is completely controlled by the peshmerga. It's a bit like Israel, if you will (almost every major Israeli politician is a decorated soldier), except that in Kurdistan the peshmerga have more control. Barzani, the current president of Kurdistan, was a peshmerga leader. Talabani, the president of Iraq, was a peshmerga leader. Kurdistan is covered with checkpoints. Security is vital, and they are making sure their territory doesn't fall into the violence that plagues the rest of Iraq.

Turkey and Iran are working together against the Kurds. Both countries have bombed northern Iraq (Kurdistan) in recent months. Most of the Kurds in Iraq realize that they can't simply declare independence and live happily ever after. They have to take their time and plan everything correctly, but don't make the mistake that the media often does; the goal is the same: independence. We will see what happens...

My name is Mathew Lanier. I'm just a student who enjoys studying the situation in the Middle East. I suppose as the years have gone on I've become more sensitive to the Kurdish cause. There is a lot of misreporting going on. This flag case is only one example. Thank you for your reply.

A little more on Kirkuk, which you seem to be knowledgable about...

President Barzani recently earmarked $200 million for the 'normalization' of Kirkuk--this is Kurdish way of saying 'annexation'. According to the constitution of Iraq there will be a referendum on whether or not the province will come under the control of the Kurdistan Regional Government in late 2007. In the elections of late 2005 the Kurdish parties gained about 60% of the vote in the province. And remember this was a time when the Sunnis were not boycotting the vote.

The KRG (Kurdistan Regional Government) and particularly the KDP (Barzani's party) have been encouraging tens of thousands of Kurds to move to the province. So it seems likely to me that when the referendum will be held the about 70% will vote to be incorporated into the Kurdistan Region. We have interesting times ahead of us.

Good to hear more details from you, thank you for answering. My knowledge of Kirkuk, the Kurds, and Iraq is only surface-level stuff. Without good press reportage or first-hand experience, digging takes too much time for most hobbyists. Even so, I did know about some of the flag issue background, yet presented it seriously, albeit with some snark, because I suspect the flag "story" will be remembered as the demarcation date which historians naturally seek. When in actuality the independence efforts of the Kurds have been impressively gradual and effective. They would be a formidable opponent indeed, and I doubt Iran or Turkey will be coming through the mountains anytime soon. More likely through Syria.

Cheney has long suspected the big oil prize in Iraq is in the North, and as I recall gave a speech about Caspian Basin reserves to oil execs which referred to it in 1998. If he's right about one thing, I hope it's that.

Do you have a ready source on your statement, "recent exploration activities indicate total reserves are close to 40 billion barrels."?

I don't have a link off hand. Some new data is expected to come out in the coming months. However, it's commonly believed Kirkuk sits on 40% of Iraq's oil reserves. High stakes, for sure.