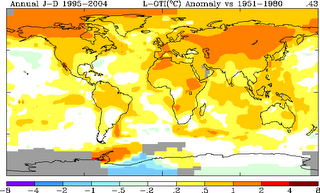 Dumbass Of The Day, Second Day
What was the Senator-Komissar from Oklahoma just saying about the importance of balanced coverage of scientific debate? Oh, yeah. That we should have more of it. Well...I'm not so sure. Debate is not efficient. Fortunately we have a government blocking access to their scientists and suppressing their reports:

The possibility that warming conditions may cause storms to become stronger has generated debate among climate and weather experts, particularly in the wake of the Hurricane Katrina disaster.

In the new case, Nature said weather experts at the National Oceanic and Atmospheric Administration _ part of the Commerce Department _ in February set up a seven-member panel to prepare a consensus report on the views of agency scientists about global warming and hurricanes.

According to Nature, a draft of the statement said that warming may be having an effect.

In February, a NASA political appointee who worked in the space agency's public relations department resigned after reportedly trying to restrict access to Jim Hansen, a NASA climate scientist who has been active in global warming research.

So what is this National Oceanic and Atmospheric Administration? Why is it part of the Commerce Department? And why do they have scientists who call themselves "weather experts?" This makes no sense. I think they should be immediately de-funded and sent to ORRI (the Oklahoma Re-Education and Re-Habilitation Institute). There is still time to bring their souls to Jesus before the Rapture comes, and it will save the taxpayers money.

Update: I dragged up a temperature map from a group of hoaxers who call themselves the Goddard Institute for Space Studies, which sounds like a NASA scam. The map tries to needlessly alarm people by comparing where temperature changes have supposedly occurred since the 1950s. I found it on site run by eco-terrorists called RealClimate.Org. Go check them out to see what the Senator-Kommisar is up against. But whatever you do, stay away from the bomb-throwers at the National Resource Defense Council. They're high on pine needles, and as you know, hemlock is deadly.