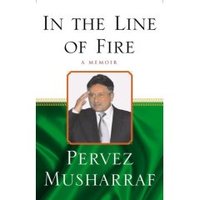 Next Stop, Pakistan
Pervez Musharraf, Lord High General of Pakistan, denied a coup yesterday, rumors of which coincided with a power outage that interrupted news broadcasts and left his country in the dark while he was apparently in a US hospital. Musharraf described the rumors as "nonsense in nonsense in nonsense." Looks like no coup, everyone was just expecting one. Hmmm.

The way my friend Still Life Living over at the Nano Religion sees it, Musharraf is publishing his book so the US government can buy a hundred million copies of it (in .pdf or e-book format) for a quick way to get laundered cash to him. Bush endorsed it. It's called 'In the Line of Fire,' and had its debut today on Amazon, where its sales rank is currently # 1,289. Seems kinda low, since I imagine Pervez could tell some stories that would split your spinal cord. So how is it that last week Hugo Chavez of Venezuela endorsed Noam Chomsky's book "Hegemony or Survival" (the title alone makes you want to click right over and buy it, huh?) and its Amazon sales rank is still #1?

Maybe Musharraf isn't house-hunting quite yet. But if he's not, he will be. Mental note: if I ever publish my book 'Emissions of a Global Capital Surfer,' I'd better make sure Bush doesn't endorse it.
Posted by MarcLord at 10:23 AM