John Smeaton: Ready For Stardom (But Rather Quietly)
I have been remiss of late in checking for updates over at the Smeatsonian Institution, but much has been afoot. There is a new song out by Mick Merch above, put into a well-done music video by Swinestein Productions. The snappy, straightforward lyrics and catchy song are a fitting tribute to the Smeatonator, who continues to maintain a modestly low profile. Lest ye can't bring yourself to click on the vid and bask in the aural waves of Scottish schlag-metal, here are a couple of choice lines:

Come ahead
I don't care
if there's fire burning in your hair!

The curator of the Institution, Mark Tortolano, who has visited Adored By Hordes, met with John Smeats personally and discussed beer, ferrets, how to have a fitting bash, and charities. Mark deserves big kudos for promoting Mr. Smeaton's cause, and for doing so with a great deal of integrity. Apart from the beers I'm sure he plans on sniping. Here is the picture of the fateful pow-wow, the "Big Nite Oot" between the phenom and his loyal Web Admin, complete with signing the PayPal password to 1,400 pints of beer in fresh web-admin blood to match the "unintentionally ironic" T-Shirt: 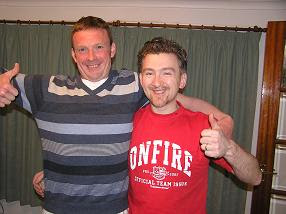 CHEERS FOR YOUR WORDS ON THE SONG AND VIDEO IT IS ALL JUST FUN...IN THE FACE OF ADVERSITY

Yah, John Smeaton is a real hero, one of us regular blokes who saw a situation and didn't think, just reacted well. His accounts and honesty when the media spotlight turned upon him do him and Scotland extra special credit. "Come ahead. I don't care! If there's fire burning in your hair." Cheers for you too, thanks for commenting.