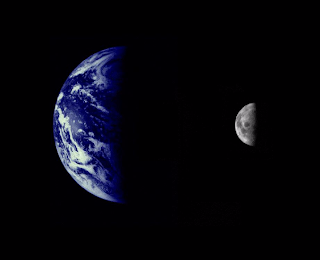 Linking To "View From The Moon"
I've always wanted "a moon with a view," and a professional writer, lawyer, and blogger who drilled through to Adored By Hordes from Iran Facts, (a.k.a Neo Resistance and run by the lovely Naj), Fleming, who runs View From the Moon, happened to read and kindly comment on the recently concocted posts of Prozac the Clown.

Fleming provides penetrating analysis of current events backed by deep knowledge of history, law, and mythology, spiced up by scalpel-sharp thinking free of convention's baggage. He (I think that's right, ey?) happened to write the children's book 'The Last Dragon,' and amongst other projects worked on writing 'The Saint' series, a spy character Val Kilmer would eventually portray in a 1997 movie by that name. Here is Fleming's profile:

I've lived many lives in one lifetime while teaching literature and creative writing in several universities, earning my living as a fiction writer for 10 years (4 of them in England), and practicing law (appellate practice mainly). Under my birth name, Fleming Lee Blitch, my children's books -- "The Amazing Adventures of Peter Grunt" and "The Last Dragon" -- were published by J.B. Lippincott Co.; I was a Bread Loaf Writers' Conference Fellow as part of an award for Best Children's Fiction of the year. Various other books of mine were published, and I collaborated with Leslie Charteris on a number of books and television scripts in the "Saint" series. I've now retired from law and am devoting myself to playing and writing.

Like most of the people I link to, Fleming doesn't seem to be too hung up on self-promotion, but View From The Moon is a refuge for fellow travelers. He is able to reach behind the Bullshit Curtain in impressively hygenic, surgical, and professional ways. With less wasted motion and fewer lost patients than my forays.

In current affairs, it's quite forgiveable if you're off huffing nitrous oxide from a large medicinal tank of it, but we've all got to come up for air sometime. VFTM would be that air, and is worth the time of anyone who wishes to understand what's going on in the now. To paraphrase Mel Gibson's character in M. Night Shyamalan's movie 'Signs:' "Play away, Fleming. Play away!" I look forward to learning much.
Posted by MarcLord at 9:34 PM

Good MarcLord! This is the best review I've ever had. There's hardly room for my head and my computer in the same room. Thank you!

In order to bask in this unaccustomed praise (you've proved once more what a good writer you are), and also in order to introduce more hordes to your blog, I am going to put a short post on VIEW FROM THE MOON linking to this URL. I can't think of any reason you would object, but if you do, please send me a not-to-be-published Comment.

Thank you again. I can't imagine why you went to such trouble to give me a wonderful review, but I definitely appreciate it.

MarcLord, I have conspicuously posted a link to ADORED BY HORDES on VIEW FROM THE MOON.

If you have time, please take a look at my more philosophical blog, FLIGHTS OF PEGASUS, and see if you would like to be linked from there.

Thanks again for the boost.

By endorsing and linking to Fleming Lee's site, you are endorsing his views that the holocaust did not occur. He is extremely anti-Semitic in his public postings on the very blog that you are linking to... Be aware of who you call friends, as you will be judged by their deeds.

The pleasure's all mine, Fleming, and I've looked at your philosophical/spiritual Flights of the Pegasus. I'm not sure most of my content would satisfy anyone coming through to here from there, but I would be honored to be linked to.

Thank you for your observation and admonitions. While I have not read all of Fleming's blog, I have become aware of his view that Israel is now a colossal pain in everyone's ass. I fully endorse that one.

As for holocausts, I would guess Fleming believes that no one group can claim it as their "brand." I've been close enough to ethnic cleansing to know, as did Hannah Arendt, that holocaust is very much in the eye of the beholder.

Millions of Jewish people were victims of virulent nationalism. Hundreds of Jewish people made up over 90% of the founding Soviet Comintern, which went to kill a score and more million Jews. Does stating these facts make me a "holocaust denier?" Does noting that the Neo-conservative movement has a de facto Comintern dominated with names like Feith, Abrams, Wolfowitz, Podhoretz, Kristol, Goldberg, Strauss (in absentia), Perle, Kissinger, Frum, et al make the Jewish people perpetrators of a latter-day Holocaust?

I endorse none of these things nor the vicious, state-sponsored murders of innocents they so euphemistically promote. I decry them, and have every reason to believe Fleming does, too. Food for thought. What, Anonymous, do your eyes behold?

Regarding the use of the term "anti-Semitism:" in the future interests of precision, its full meaning may be helpful. All Arabs, including the Israelites, are Semites. Ishmael and Isaac have the same father. I am not an anti-Semite, and don't believe in killing Arabs.

Thanks for mentioning me. I thought you grew tired of my recent apoliticalness :)

No, Naj, not tired at all. Sometimes I don't give myself enough time for beauty, true, but I very much appreciate the way you collect and express it on your site. I see and learn something good every time I visit, which I shall do again right know.