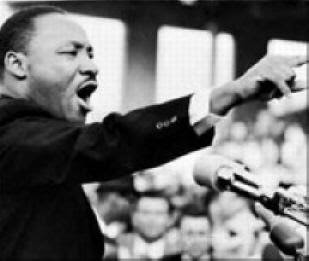 MLK: Beyond Vietnam--A Time To Break Silence
(Update: I forgot to link a heavy credit to Zoey and Me at Cat In The Bag for their post on the coming showdown over the upcoming children's health care veto. But for them, it would have escaped my notice.)

The next appropriations bill is for roughly $200 Billion, about $50 billion lower than the last one. When Congress complains it will have to cut programs, like the one it wants for only half of the 8 million children without health care insurance, the Wite Hows will veto a bill to expand the Children's Health Insurance Program, and simultaneously accuse its Parliament of Whores of budgetary excess and of "spending like there's no tomorrow." All while insisting on increased war allocations. Never mind the $1 Trillion+ already appropriated for The Yee Ha War, and the $2.5-3.5 Trillion it's going to eventually cost even if it were stopped today. Assuming we don't cut VA hospitals and don't do away with Veteran's Benefits. (Oh, right! That's part of the plan, too.)

I didn't bother posting about the Great Senate Sleepover, figuring they wouldn't accomplish anything other than to hold a presser and act dramatically sleep-deprived. Question: what would happen if Congress actually passed an Act demanding the withdrawal of the US from Iraq? (Don't answer.) So, I felt like hearing something a lot more inspirational, something a lot more true. Someone who's willing to say war's expenses lead to a lack of domestic investment. That killing abroad is directly connected to not caring at home.

MLK's full Vietnam speech is available at American Rhetoric, which has audio and transcripts available of its picks for the Top 100 Speeches. Here's but one excerpt:

"I wish not to speak with Hanoi and the National Liberation Front, but rather to my fellow Americans, who, with me, bear the greatest responsibility in ending a conflict that has exacted a heavy price on both continents. Since I am a preacher by trade, I suppose it is not surprising that I have seven major reasons for bringing Vietnam into the field of my moral vision. There is at the outset a very obvious and almost facile connection between the war in Vietnam and the struggle I, and others, have been waging in America. A few years ago there was a shining moment in that struggle. It seemed as if there was a real promise of hope for the poor -- both black and white -- through the poverty program. There were experiments, hopes, new beginnings. Then came the buildup in Vietnam, and I watched this program broken and eviscerated, as if it were some idle political plaything of a society gone mad on war, and I knew that America would never invest the necessary funds or energies in rehabilitation of its poor so long as adventures like Vietnam continued to draw men and skills and money like some demonic destructive suction tube. So, I was increasingly compelled to see the war as an enemy of the poor and to attack it as such."

Speech delivered at The Riverside Church in New York City on April 4th, 1967.