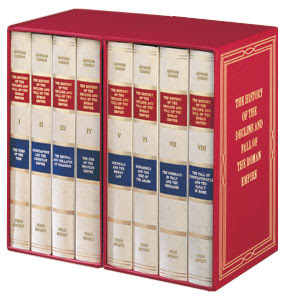 Gibbon, author of [The History of] The Decline And Fall Of The Roman Empire, was given three minutes alone with Bush in the Oval Office to explain how unchecked power leads to institutional decay.

Despite the limited time frame, Gibbon, speaking afterwards with reporters in the White House driveway, said he came away impressed. "He is quite hard to classify in that he is more delusional than Caligula and less artistic than Nero. He is consistently cruel and self-centered in the manner of a Commodus, yet possessed of a combination of effeminacy and abject physical cowardice that I have never previously encountered."

Gibbon was not ready to give the President a final grade. "From everything I can tell this Bush person is perhaps a Caesar at best. It is said that the true Emperor lives deep beneath the sewers of a place called the Naval Observatory. Whatever that is."

(Notes: the above post is a spoof, but only because Edward Gibbon has been dead for 213 years. Other than that, it is precision itself. I have plagiarized it from two bozos who call themselves Jerry and Joe Long. The true Emperor does indeed live beneath the sewers of the Naval Observatory in Washington, D.C., the oft-referenced "secure location.")

Mr. Gibbon may have thought he was alone with George II in the Oval Office, but I'm willing to bet that the king's chief advisor, Duke Cheney, was listening from behind the arras. Too bad he didn't meet the fate of Polonius and receive the point of a sword through the arras.