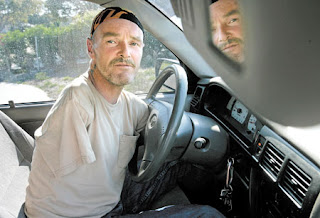 "There's so much more to flying than just flapping around from place to place! A... a... mosquito does that! One little barrel roll around the Elder Gull, just for fun, and I'm Outcast! Are they blind? Can't they see? Can't they think of the glory that it'll be when we really learn to fly?"

"I don't care what they think. I'll show them what flying is! I'll be pure Outlaw, if that's the way they want it. And I'll make them so sorry..."

Meet Michael Francis Wiley: American
While browsing through a Car & Driver magazine at the drug store on a prescription run, I saw a little filler-story about a triple amputee who led police on a chase through New Port Richey, Florida. Police claim thhey broke off pursuit of the white male's Ford Explorer after 8 minutes because "it could have put others in danger." Other sources say the chase ended because Wiley out-ran the chase vehicles. An arrest warrant is sought for one-legged, no-armed methamphetamine dealer Francis Wiley on charges of fleeing to elude. In 2006, he led police on a 120-mph chase down I-75 in a Corvette until one tire came off and the aluminum wheel rim began to burn. Here was the money quote:

"He is one of the best drivers I've ever seen in my life ," said Lee Michie, a longtime acquaintance. "But he's the worst person I've ever met."

Now...you just know there has to be more to that story, right? I put down the Car and Driver, vowing to follow it up on The Google later, and sure enough. There's more. More than can be casually communicated. I can't allow an inability to communicate to stop me. So. Imagine a crazily unequal triangle. On one point is abhorrence. On another is pathos. On the last is breakthrough. That's a triangle of Michael Francis Wiley's personality.

It is a felony for him to merely sit in a driver's seat. According to court records, Wiley, aged 40, is a felon capable of physical violence. He repeatedly assaulted his wife, decked a state trooper twice, and tried to attack others. He has a steady string of violations, 47 of them (most involving driving) stemming back to 1984, when he stole his first car, drove for the first time with no license, and got into his first police chase. And first crash. He has spent at least 3 years in prison, where he was so good at provoking detention officers he was beaten and sprayed with mace like an unwanted pole-cat. After he got out, fellow ex-con murdered a woman in his living room while he and his family slept. His mother no longer morally supports him, and his wife has left him.

As a child, Wiley's father was a mechanic for the Transit Authority in his native New York City. His grandfather was a mechanic, too. His first sentence was "Daddy fix car." When he was 13, while playing with other truants, he fell off an elevated train platform onto power lines, and, searching for a foothold to get down by, found one made of metal. His body made a temporary circuit-breaker for 12,000 volts before it was blown dead to the pavement 25-30 feet below. The impact revived him. Three limbs were damaged too badly to save, and were removed at Bellevue hospital. One month later, he escaped the hospital by hopping through a utility tunnel. Here is a report by Stanley Portnow, the forensic psychiatrist who treated him in 1981:

. . . attempts to keep up a rather tough guy facade which is meant to say that nothing can really hurt him;

. . . not only out to prove that he is as good as but rather better than he was before the accident;

. . . his continued denial of his realistic state will produce more and more social adverse effects;

After the accident, his parents moved to Florida. He stole the car, then later bought a black-on-black Monte Carlo SS with the injury settlement he got. He starts cars by gliding the key into the ignition with his mouth, then turns it with his toes. He shifts with his knee, and bites the headlight switch and turn signals. He turns by jamming his left arm stump into the wheel spokes and whipping it around. He put 50,000 miles onto the window-rattling V-8 in one year, traveling all over the country while dreaming of becoming a race car driver. Needing friends to pop the tops of beer cans, he became popular, and went to a Halloween party as a shark attack victim. He got married. Had a daughter. Drove like a burning wounded bat out of hell. He piled up speeding tickets until his license was taken away. He keeps driving, police see him, and he gets into more car chases. Both his lawyer and mother believe he needs regular access to a private race track.

"I'm an excellent driver," he says. "If I could just get my license back, I'd never be in here again."

That is unlikely. His license is suspended for a considerable period of time. When a dog is hit by a truck, when a bug gets stepped on, when a reptile loses its fore-limbs, when a seagull breaks a wing, they die or do the best they can. They compensate. If they can crawl away, they do so. But they'd probably greatly prefer to drive. Even to fly. Asked what he'd do to get his license back, Michael Francis Wiley said this:

The Human Condition. Ain't it the truth...

Hey! Nice to have you two on the same thread.

Yeah, this guy brings up all sorts of conflicting emotions. For me, he gives some perverse reflected pride at being so gloriously human.

Hey, Hope: what dishwasher did you settle on?

Gotta admit, this post reminds me of Dudley Moore & Peter Cooke and their stand up "The Great Train Robbery" where they introduce the audience to a one legged Tarzan. "I Like the one leg, . . .It's perfect for the part, but I don't think the British public is ready for a one legged Tarzan." Those guys were great. Thanks for the post that brought them back to me in my memory.

Ah, I'm just a tad too young to have seen much Moore & Cooke, but I've seen some clips of their out-takes. And they were bedazzling. Perhaps this merits a YouTube safari...