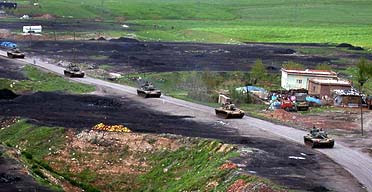 Turkey Masses 150,000 On Northern Iraq Border...And Much, Much More!
It's great to see Turkey finally doing its part to help out with the region's stability. At the preceding link, the Bush Administration claims that there is no build-up, which means they're taking this time-honored imperial diplomatic approach: "Oh, crap! Now what?? What did we promise the Turkeys, again?" Of course, Turkey has been making noise since at least April, noise of the shooting kind, and has been going over the border into Kurdistan to chase the ethnic secessionist Kurdistan Worker's Party (PKK) militias. That was with only 30,000 troops. If my math is correct, this is something bigger. For some reason, Turkey feels like they're owed some Kurdish oil in exchange for helping out with Gulf Wars I and II, and they think the US welched on the deal. Whether the build-up is gamesmanship or for real remains to be seen, but a Turkish invasion of Kurdistan is much closer to a "for real" than it was a year ago, now backed by 15 combat divisions.

Next, Israel has mobilized its divisions to either get ready to attack Syria or to re-invade Lebanon. How do I know this? Oh, you know...I listen to Hebrew hip-hop, eat at a kosher deli, that kinda stuff. Syria today just warned all Syrians to leave Lebanon ahead of a military "eruption" they think will take place next week. Plus, Israel is outraged that Hezbollah has been preparing defensive positions in southern Lebanon, somewhat like when France built the Maginot Line defenses, it outraged Hitler.

I and others believe Israel plans to attack over the Golan Heights, stomp on the conventional Syrian army, make Assad flee, then wheel around and attack Hezbollah in Lebanon from the rear pay-back style. The Syrians and Hezbollah Lebanese will get to try out all their new Russian weapons, including the world's most advanced anti-aircraft missile systems and more of the same portable anti-tank weapons that took out Merkava tanks. Amazingly, the Israelis, who still fight blitzkrieg-style using WWII armored-column tactics, didn't learn their lesson in Lebanon last summer. They might make it through Syria. But they'll get out-boxed in Lebanon, and worse this time than the last. Their troopers are thoroughly demoralized, and even if their equipment issues are solved, they are ill-led. Highly motivated foot soldiers equipped with heavy-punch weapons can tie down armored columns if they can make the air assets stand off. Especially coming off a popular victory. Last summer, Hezbollah learned it took very few missiles to make Israeli pilots skittish. So they went out and stocked up on them like they were Roman candles.

Finally, rumors of Iraq withdrawal discussions in the White House abound. Yes, there will be an Iraq withdrawal just like there was always going to be: to 3-6 permanent bases manned by 3-4 divisions and @50,000 mercenaries. This is not a "bring the troops home" pull-back. It's a "let's free them up to use somewhere else" strategy. And that won't work either. In other news today, the Mahdi Army clashed today with US forces north of Baghdad last night. The Sadrists are the most numerous, main-stream, and powerful group in the country, and they've been holding back based upon their leader Moqtada's say-so. This blows no good.

As you know, I'm a bit skeptical about the Occupants of the White House ever leaving it. But I neglected to mention another increasingly likely scenario: outright military defeat and devolution into Mid-East regional chaos. This has already been taken as a given by the countries in Iraq's sphere for over a year. Even loyal Saudi Arabia is planning for war. Turkey's build-up is like a vulture edging up to a tourist dying of thirst. The proxies of the surrounding countries which correspond to the dominant domestic interest groups will move in to stabilize the remnants of Iraq whether the US wants them to or not. When, not if. Proximity and intelligence are vast advantages in war's logistics.

It might be the Republican Party which, suffering from Cheney Fatigue, will stop the war. The cabal is the war, so stopping it is congruent to throwing them out of power. In a possibly delicious historical irony, it was George Bush Senior, who, while chair of the Republican National Committee, penned the letter to Nixon asking him to resign for the good of the country. Too hopeful? Maybe. But the military situation on the ground is rapidly coming to a head, it's not developing in our Empire's favor, and a growing number of insiders finally are coming to acknowledge the White House can't control that reality.

(Update: Picture above is of Turkish tank column rolling through a small Kurdish village 40 km from the Iraq border on June 1, 2007. The Guardian article is a good brief, available here.)

You are a master at showing the big picture. It appears that all the nations and factions in the Middle East are preparing for the immindnet chaotic collapse of what's left of Iraq when the Americans throw in the towel.

While the US plans to occupy bases in Iraq forever, it's beyond me how they will deal with the takeover(s) of the rest of Iraqi territory. Will the Kurds try to grab a piece, and the Turks squash the Kurds and grab the piece for themselves? Will Syria, Iran, and Saudi Arabia get involved in the land rush? (Personally I think the Americans are so weakened and overstretched in Iraq that the Iranian military machine could sweep across to Jordan right now.) Will the greater anarchy affect Israel's depredations? If you are right, maybe Israel will try to neutralize Syria before the total collapse in Iraq.

I'll stay tuned to this blog to learn the news in advance.

And you are a master of logical process and scrupulous detail. Not my strong suits, and you're pretty damned good with the Big Pic yourself.

A former wargaming partner with real tactical talents asked me three years ago how Iran (the real objective) could be beaten. I answered the only way to do it would be to create a vacuum and get them to invade Iraq, but even then, I don't think they're that dumb. Iran's mistakes have not been exploitable thus far and they've played brilliantly. I told him Iran had already won.

The US is not only dumb, but desperate, and Israel has already gotten sucked into a humiliating defeat because of it. Neutralizing Syria ostensibly cuts off Iran. But not really. Also, there is a Russian naval base in Syria, and Russia is Israel's primary petro supplier.

Even with relatively easy military victory in Syria and Lebanon, very doubtful, it's hard to see how Israel can come out ahead. Hezbollah's cohesion isn't breakable, and attacking it again will result in an invasion into Israel itself. The US can stay in Balad, Basra, the Green Zone, and the super-base going up in Kirkuk for the next 10 years. So what?

It's much easier to see how a detente between the Saudis, Yemenis, Iranians, Syrians, and Kuwaitis could form to around Iraq's oil. How that federation could be the basis of a truce with Israel, which would gain access to much closer energy security. How the quid pro quo would be to lay off the Palestinians and grant them autonomy, the required keystone to peace's regional archway. This is what Jim Baker's ISG saw as the political solution. But there are a number of personally unattractive consequences to this approach.

The Bin Laden Group would thus largely push out Halliburton from regional oil services and probably become the titular as well as de facto ruling family in Saudi Arabia. This would ensure a sinecure for the Sunnis in Iraq, which is what they're fighting over, and it would bring stability to the Saudis. But western oil companies would come up on the short end of the stick, and Russian and Chinese capital would finance development in the region. They would be the big winners along with Iran (oh, the humiliation), and the Great Game would be lost. Cheney would rather see the whole region burnt to brimstone and treacle before that happened. So it's anybody's guess how this will play out.