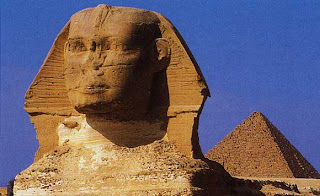 Stared, chuffed, hooted and chattered at
by Neanderthals and then Cameroons,
I fled into a temple and was affixed
for syncretic centuries at its summit.

I was an idol who entered a priest;
I was worshipped and then sacrificed.
I took on the bloodied skins of Brahma
and raged through the forests of Eurasia.

For my demise, Shiva waited patiently
while Vishnu hissed and hated me;
they maintained I had done some deed
the ibis and crocodile had trembled at.

So they sealed me in sarcophagi
and left me to the yawning years.
I know the innocently smirking Sphinx
is far, far older than we think.

(With hat tips to Coleridge.)

Marc this is a pretty good kind of a poem & I will come back to it. Who is the I who speaks? I thought at first it must be the Sphinx.

Probably the "I" is meant to be various iterations of old gods, which was really the same god all the while, which was never accepted by orthodoxies and doesn't exist, at least not in the way anyone imagines. So they all conspired to shut the "I" in a tomb.

In addition to denying ourselves as we really exist, terrified somehow that our own shit smells, I think civilizations of the human race are much more ancient than we're ready to admit. Because our civilizations are to such a great extent functions of climate, geography, luck, and impermanent technologies. Which is a terrifying thought at a selfish-gene level. There are temples 12 kilometers out to sea off the coast of India, under the water. We really don't want to know who built them.