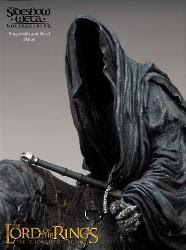 Consequences Of Attacking Iran, Pt. VI: The Last Ride Of The Oil Wraiths
Dick Cheney was outed by the Guardian today as the chief proponent of attacking Iran (ok, no news yet), and the article claims he has won out over Condoleeza Rice and Undersecretary of State Nick Burns for procuring Bush's approval to Bring 'Em On (News. That would be news.). Cheney and The Nazgulettes have been fighting an internal tug-o-war over Dubya's wavering judgement against Condi, Bob Gates, Bush the Elder, and most of the planet. Cheney has reportedly won. On the bright side, this article will spur the sane people, and many marginally sane people, into working harder against another idiotic war, into re-doubling their efforts to block it and send Cheney yee-hawing like Bat Guano to crash harmlessly down into the earth on a disarmed bomb.

We do have a strange bedfellows issue. I would rather pet a cobra than be in the presence of Condi Rice. Or hear her duplicitous tongue form words from the rush of air. And I do not want Bob Gates anywhere near my bed, my dinner table, my house, nor my state. But I appreciate that they and others will do everything they can to undermine Cheney, including leaking this information to The Guardian so a news story can be written. At least some commentators are starting to identify the Sauron's Eye of America's troubles. It was Cheney who ditched the ISG strategy and championed The Surge. It is Cheney who has been pushing for military action against Iran ever since the invasion of Iraq. A barely reported objective of "The Surge" logic is to reinforce Iraq's border garrisons before a strike on Iran. Based on a total of 6 (3 deep-sea, 3 amphibious support) carrier battle groups being massed in the Gulf earlier this year, and on Israeli signals, I believed an attack on Iran was slated to have commenced in April. It didn't happen, and I'm glad events proved me wrong. We enjoyed a nice respite as the Oil Wraiths argued with each other. Now the losers of that argument signal us they could not convince the Grand Decider, that the Lord of Political Logistics won the game of worm tongue.

People commonly assume, as I heard at a suburban steak dinner from fond former classmates last night, that Iran can be easily subdued. This view is strategically misinformed and tactically out of date. All the competent professionals who have analyzed attacks , as I noted to my old friends, think it would be disastrous for the United States' military and for its interests in the region. This blog has harped upon those facts in the past. All known wargame-simulated Iranian invasions or air bombing campaigns ended with the US losing miserably, featuring both strategic and tactical defeats.

The simulations were well-crafted. The terrain in the Persian Gulf greatly favors prepared short-range missile defenses, with rocky crennelations ideal for concealing the new Russian-made Sunburn and Moskito missiles, for which the US Navy has no effective counter-measures, especially in an area as constrained as the Gulf. Obviously I can't provide a source confirming the presence or location of such missiles, but you can safely assume they are part of a well-mapped killing field worthy of Cannae. It is backed by a lethal arsenal of small combined arms designed to overwhelm and eliminate large, vulnerable surface targets.

The United States has a total of 277 warships. Half of them are now near Iran, as the Guardian article states. If Dick Cheney has convinced President Bush to attack, and Grand Master Bozo lowers the checkered flag, expect the Straits of Hormuz to be closed for at least 6-12 weeks, for at least half the world's oil shipments to be bottled up into the Gulf for that time, thousands upon thousands of sailors and marines to sink to the bottom of the Gulf, and the relatively quiet parts of Iraq to erupt while the remaining lifelines to American troops are cut. I wonder how the stock market will keep setting record highs in such a confusion of coincidence. Think about the consequences of that for long, and you might start stocking up on toilet paper. Or even building a backyard outhouse, since it is oil which runs the pumps of so many municipal waterworks.

In the Lord of the Rings, Sauron is deceived by glimpses of the One Ring, erroneous reports of his Nazgul, and by the errant face of a defiant Hobbit into launching his all-out attack on the white city of Minas Tirith earlier than he would have preferred. This came immediately after he and his allies suffered unexpected defeats in neighboring lands they previously considered weak. The wizard Gandalf the Grey correctly sensed Sauron's desperation and fear, for Sauron has masters, too, who demand quick results. Gandalf took the lack of patience as a sign of hope.

I do not wish more bombs or dead upon anyone, particularly not delivered from my country. And I do not wish more dead Americans. Yet the analogy is clear. The threat is seen in the wrong place. The enemy is misunderstood.The all-seeing eye of the White House is now once again in a "Flucht nach Vorne" (retreat to the front) stance, Iran will be much tougher in a direct military conflict than it is in a stand-off, and the consequences for its attackers will be harsher than even most pessimists imagine. Bush is a very, very desperate man whose time is running out, as is his Chamber-master, Dick Cheney. If you have ideas for how best to delay the last ride of the Oil Wraiths, I'd like to hear them. Because many of us happen to be their orc-ish subjects.

Thanks so much for your kind wishes.
To not disclose my whereabouts, I kept your message with my private emails. Please do drop me a line if you get your ticket.

I'll be back to read your post, once my BD euphoria's over :))

Wallow in glorious BD euphoria. May it never fade. And if I visit your blessed havens, for which I admit Amsterdam, Tokyo, and Prague compete, you will surely be the very first to know. The first and last time I was there was for its World Expo, as an appreciative and unencumbered young boy.

Marc, you have a knowledge of strategy and military tactics which I haven't found in any other blog, and which makes your posts on those subjects very valuable to me and others.

This idea particularly fascinated me because I've never see it before except in one of my own posts: 'A barely reported objective of "The Surge" logic is to reinforce Iraq's border garrisons before a strike on Iran.'

'It has occurred to me that there may be a second reason . . . for the Bush “surge” of U.S. troops in Iraq. What if the U.S. administration anticipates attacking Iran in the near term? Wouldn’t it make sense to bolster U.S. forces in Iraq, whose border with Iran was the site of fierce warfare in the past?

'Perhaps the American government anticipates nothing beyond an air attack on Iran, but in war the unexpected always happens. I can picture Iranian ground forces rolling into Iraq if the U.S. attacks Iran. American troops and helicopters already mired down in their struggle against the Iraqi resistance would face all-out war on an eastern front.'

Marc, pardon me for commenting off point, but you list "Children of Men" as one of your favorite films, and for that reason I watched it. I was left confused: Is it a movie about the horrors of large-scale illegal immigration (which reduced London to something like a poor district of Calcutta), or is it about the horrors of the British government's response to overwhelming illegal immigration?

I'd appreciate your comments.

INteresting post but why did the Guardian get the tip? I have read months ago about the master plan being for the US to bomb Iran while Israel bombs Syria simultaneously creating a center of confusion. US and Israel pick up the pieces and form new hand picked governments. Or knowing Bush perhaps this is a mirror media image of the cartoon I posted on my blog "Iran is Scariest Menace in history of Scary Menaces." You'll LOL when you see the whole Tom Tomorrow panels. Be of good cheer!

The most basic US military thinking recognizes the threat posed by Iranian incursion to supply lines. The border was and mostly still is wide open. Militarily, this is nothing short of idiotic.

Reinforcing with combat battle-groups means they could be at least sent to hot spots. Not the greatest solution, but they can quickly re-open the lines if cut.

Interesting (and I think non-Iranian coincidence) that the most profound response to The Surge was to finally start blowing up bridges. Baghdad now has only one bridge open to heavy trucks. Also interesting that the composition of the Surge included many units of combat engineers

Will think about that. Maybe subject for a post.

Dunno why the Guardian. Wheels within wheels.

Will check out the scariest menace of history. =)