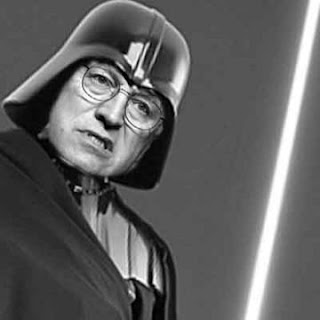 Back when the investigation into the leak of Valerie Plame Wilson’s identity began, Mr. Bush insisted that if anyone in his administration had violated the law, “that person will be taken care of.” Now we know what he meant.

Mission Impeachable
In January 2009, when Dick Cheney hands over the keys of power to Hillary Clinton, Barack Obama, or Al Gore, everything will be difff-

Wait a minute. Something's not right with this picture. Really now: do these people look like the type to hand over power to their opposition on something as minor as an election? And if those in the court of George II lose power, won't they be vulnerable to prosecution for a host of crimes, wouldn't they be vilified, spit upon, and endlessly agonized? Wouldn't they have to take blame for the millstone-anchor-disaster of the Global War On Terror and sink with the cathedrals to incompetence they've built to stand by bells ringing on the ocean floor of history by the subject-heading of "What Not To Do?" Might not they even be [gasp] jailed?

Our states are ourselves, multiplied. They are what we are. We and they are subject to the principles of biology, to the trials of evolution, to the struggle to survive amongst competing Others. If we felt sheltered from those struggles it was because a group protected us with great proficiency. Here's two shots of bourbon, no ice, no chaser: proficiency is gone, gone, gone.

Sackcloth? Check. Ashes? Check. Time. Funny thing, time. They say Mussolini made the trains run on time. Well, Dick Cheney made the planes run on time...into buildings. If Dick Cheney isn't impeached or otherwise excised, it's over. The US of A is waving bye-bye, and the Residents are not planning on leaving office. Oh, they may hand it over like a spent quarter-miler to someone they approve of and continue running it, panting from the shadows. Fred Thompson the Nixon-mole comes to mind. (Nixon thought he was "dumb as hell," and H.R. Haldemann said, "I guess we're stuck with him." Voila! Qualified.) Dubya will sprint out of the Oval Office like a drunk to a happy hour, perhaps to receive the heavy medication and professional care he deserves. Every additional presser wears on him like the inquisitor on the priest in The Devils of Loudon.

What I mean is, BushCo is certainly not going to give up power in any orderly fashion. They'll nuke Boston before they have to give up "the reigns," and as the "Cradle of Liberty" gets sucked up into the clouds, old man Bush will be cackling like a posse of insane sideshow geeks while his aide hits the rewind button over and over. Papa Bush: "Take that, you Kennedy vermin! Got every last one o' ya! Hey, Teddy--feeling a little...crispy? Better than barbituates and Chappaquiddick. Ha-hahaahaaahaaaa! That's for spoiling Dad's Senate run back in '54! That's for hanging us out in the Bay of Pigs! Press the doo-hickey again, Smedley. I just can't stop watching this."

I knew the current W.H. gang wasn't going anywhere by September 12th, 2001, after making sure my loved ones were safe and making my way back into the City. Chills had previously been going down my spine when the words "permanent majority" kept getting tossed around, the Bush family and its scion of craptaculence had actually won the Republican nomination, and when Dick Cheney chose himself as Vice President. Also, they had already come right out and told us what they were going to do. Like on page 63 of "Rebuilding America's Defenses: Strategy, Forces, and Resources for a New Century:"

Further, the process of transformation, even if it brings revolutionary change, is likely to be a long one, absent some catastrophic and catalyzing event – like a new Pearl Harbor.

Yeah. As I've previously posted, Paul Wolfowitz said "New Pearl Harbor" in his commencement address to the graduating West Point class of 2001, on June 2nd of that year, about 15 times. He mentions sneak attacks, torture, and crusades:

This year marks the sixtieth anniversary of a military disaster whose name has become synonymous with surprise—the attack on Pearl Harbor. Interestingly, that "surprise attack" was preceded by an astonishing number of unheeded warnings and missed signals. Intelligence reports warned of "a surprise move in any direction," but this made the Army commander in Honolulu think of sabotage, not attack. People were reading newspapers in Hawaii that cited promising reports about intensive Japanese diplomatic efforts, unaware that these were merely a charade. An ultra-secret code-breaking operation, one of the most remarkable achievements in American intelligence history, an operation called "Magic," had unlocked the most private Japanese communications, but the operation was considered so secret and so vulnerable to compromise that the distribution of its product was restricted to the point that our field commanders didn’t make the "need-to-know" list. And at 7 a.m. on December 7th, at Opana radar station, two privates detected what they called "something completely out of the ordinary." In fact, it was so out of the ordinary that the inexperienced watch officer assumed it must be friendly airplanes and told them to just forget about it.

He cites Eisenhower's letter to the troops embarking on D-Day, to invoke the crusade:

"You are about to embark on a great crusade," he told them. "The eyes of the world are upon you. The hopes and prayers of liberty loving people everywhere march with you."

Today, as you, the Class of 2001, go forth on your own crusade, our hopes and prayers go with you. Thank you, God bless the Class of ’01, and God bless America.

Out of the ordinary. Surprise. Attack. Crusade. Tell me about it. Need more dots? If those aren't enough, take your Zip-Fizz for today. Speaking of today. The New York Times finally gets around to demanding a withdrawal from Iraq. Is the Sulzberger family (the owners of the newspaper) kidding, or are they just delusional?? They can't seriously think the Office of the President will comply with, or even acknowledge, such a comically mewling request. For something which calls itself a newspaper, the reportage is...unfit to print. A better time for the Press to protest would've been, oh, back when the Supreme Courtiers let James Baker convince them to hand the election to Junya, or when the NYT stood aside and let anyone who spoke up against the war get smeared. Or when it actively did the smearing and knowingly spread falsehoods to sell it.

So, sure, sure, the Bush Administration is going to "hop right to it" because of an NYT editorial and withdraw from Iraq. Assuredly, they're having a Cronkite Moment right now, you idiotic, overweeningly dubious Sulzberger mother-...whoops! Sorry. I have once again let my impulse to deride a corrupt, co-opted, sclerotic, distended-sphincter institution distract me from the main point. Which is...

The Cheney Cabal was thirty years in the making. Its primum mobile was a belief that Executive power had to be re-taken, in secret, then methodically centralized and greatly amplified in order to save America from the barbarians teeming around it. ([Uncle Sam appears in full costume.] "Hi, Canada! Nope, you better not attack us today. Tomorrow neither. Cuba, you'll get what's coming to you soon. Very soon.") Now that they've got the power, the only way they're going to let it go is if a) Congress and the People convene to make a new country, or b) they go bankrupt.

It's pretty unlikely Cheney is going to be impeached. All the checks on Executive Ambitions have been neutralized. Congress, the Courts, the Military, the Press, the People. Military Keynesianism runs amok, and is supreme.
But why not? It's getting more possible, and we have to try. There are signs of hope. The country is digesting the impact of the Libby Pardon. They don't have to understand it, they just have to basically grok that it was a shitty thing to do. Easy enought, and which they're doing. That's the first step. Bush and Cheney have already lawyered up, so they're scared and not certain of the outcome. What the hell: sign a petition. I have.

Here is the likely alternative to impeachment, courtesy of Chalmers Johnson:

It is difficult to predict the course of a democracy, and perhaps even more so when that democracy is as corrupt as that of the United States. With a new opposition party in the majority in the House, the country could begin a difficult withdrawal from military Keynesianism. Like the British after World War II, the United States could choose to keep its democracy by giving up its empire. The British did not do a particularly brilliant job of liquidating their empire, and there were several clear cases in which British imperialists defied their nation’s commitment to democracy in order to keep their foreign privileges – Kenya in the 1950s is a particularly savage example – but the people of the British Isles did choose democracy over imperialism, and that nation continues to thrive as a nation, if not as an empire.

It appears for the moment, however, that the people of the United States prefer the Roman approach and so will abet their government in maintaining a facade of constitutional democracy until the nation drifts into bankruptcy.

Of course, bankruptcy will not mean the literal end of the United States any more than it did for Germany in 1923, China in 1948, or Argentina in 2001. It might, in fact, open the way for an unexpected restoration of the American system, or for military rule, revolution, or simply some new development we cannot yet imagine. Certainly, such a bankruptcy would mean a drastic lowering of the current American standard of living, a loss of control over international affairs, a process of adjusting to the rise of other powers, including China and India, and a further discrediting df the notion that the United States is somehow exceptional compared with other nations. The American people will be forced to learn what it means to be a far poorer nation and the attitudes and manners that go with it.

Loss of control over international affairs sounds like a relief to me. But then, I don't wield the light-saber.
Posted by MarcLord at 12:48 AM

Excellent essay. I really hadn't considered seriously the possibility that Bush and Cheney might not hand over the reins (reigns) in 2009, but now you've got me worried.

I imagine the last words in many a country before the coup or revolution were, "It can't happen here."

Well, thanks to you especially, I'm beginning to think it can happen here, and one reason I think that is the impotency of what are supposed to be the opposing party and the checking and balancing branch of government. I can imagine that if Bush & Co. generate a big enough crisis, a Wolfowitz Pearl Harbor, Congress will just watch the coup with trembling lips and whimpers of "Support our troops". . . troops which by then may have surrounded the Capitol Building.

Their efforts to maintain the facade are starting to slip, despite preference for the facade's cover. They're starting to just come out and say to Congress, and to us, "What you gonna do?"

Living in NYC at the time of the attacks probably made me take a closer look at them than I would have otherwise. There was too much anecdotal, direct evidence that just didn't fit. Either way, we're in uncharted territory, so I have no idea what will go down or how. I just know that they're absolutely determined to hang onto power, cost be damned. Life During Wartime.