Happy Thanksgiving
Some nice, calming footage of The Other Dark Meat strolling around unsuspectingly on their organic farm.
Posted by MarcLord at 11:03 AM No comments: 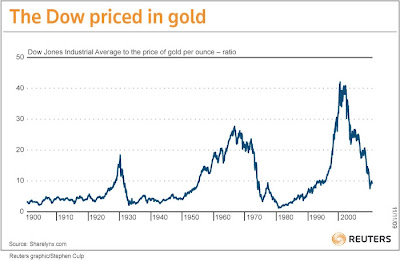 The Dow Jones Industrial Average, Priced Per Ounce of Gold
The fascinating chart above provides a thought-provoking alternative scope for viewing US economic history as its its assets became more publicly traded.

The Great Crash of 1929 looks like a minor bobble in a steeplechase. The broad-based post-WWII economic expansion capped by the Go-G0 '60s began to falter congruently with US fortunes in Vietnam, then was followed by a steep crash brought on by the conflict's huge debt overhang. As the US went off the gold standard at Bretton Woods II and printed money to pay those debts, the Dow/gold ratio touched its century-long low in the late '70s as the Fed raised interest rates to century-long highs in order to stanch hyperinflation.

Finally, the Dow-gold multiple scaled a cliff wall in the '90s as simultaneous housing and dot-com bubbles rapidly filled in the mid-'90s, with a decade-long decline which shows no technical or fundamental sign of abating, and which at @10:1 is still at least twice the previous century's non-bubble baseline. Physical gold and other industrial metals are compelling portfolio investments in that context.
Posted by MarcLord at 1:39 PM 6 comments:

On the 11th Hour of the 11th Day of the 11th Month, the Guns Fell Silent
Am commemorating Veteran's Day by waiting in an internet cafe at the airport, aware that many have been sacrificed for the privilege of my doing so. The above Black Adder clip, while comedic, might as well be a real transcript of low-level British commanders steeling themselves with black humour before embarking on a suicidal attack in the Great War. Here's Hugh Laurie of "House M.D." fame playing the Leftenant who greets a glum Captain Darling, sent down by a general to join the deadly fanfaronnade:

Laurie: "Well this is splendid comradely news! Together we'll fight for king and country and we'll be sucking down sausages in Berlin by tea-time!"

Darling: "...rather hoped I'd get through the whole show. Go back to work at Pratt & Sons...keep wicket for the Croydon Gentlemen...marry Dorothy. Made a note in my diary on the way here...it simply says, 'Bugger.'" 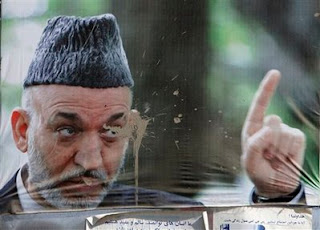 Afghanistan Updates
Abdullah Abdullah, presidential challenger to Hamid Karzai, announced that he was quitting the runoff election. In a choked-up voice he cited concerns about increased violence in Afghanistan and outrage at the fraudulent election process. The election was canceled and Karzai was declared president.

More U.S. troops died in Afghanistan in October than in any month since that war began eight years ago. A suicide bombing by Taliban militants killed six U.N. staff, and Major General Mike Flynn, director of intelligence for General Stanley McChrystal's headquarters in Kabul, warned that the number of insurgents in Afghanistan (many of whom were from other countries) was now between 19,000 and 27,000, a ten-fold increase since 2004. "I wouldn't say it's out of control right now," Flynn explained, "but this is a California wildfire and we're having to bring in firemen from New York." President Barack Obama caved to pressure from Congress and military contractors and passed a $680,000,000,000 defense bill.

Nuristan, a province on the Pakistani border, essentially fell to the Taliban after the U.S. withdrew its forces from four key bases. Similarly in Khost, another eastern province bordering Pakistan where U.S. forces once registered much-publicized gains (and which Richard Holbrooke, now President Obama's special envoy to the region, termed "an American success story"), the Taliban is largely in control. It is, according to Yochi Dreazen and Anand Gopal of the Wall Street Journal, now "one of the most dangerous provinces" in the country. Similarly, the Taliban insurgency, once largely restricted to the Pashtun south, has recently spread fiercely to the west and north. At the same time, neighboring Pakistan is an increasingly destabilized country amid war in its tribal borderlands, a terror campaign spreading throughout the country, escalating American drone attacks, and increasingly testy relations between American officials and the Pakistani government and military.

Meanwhile, the U.S. command in Afghanistan is considering a strategy that involves pulling back from the countryside and focusing on protecting more heavily populated areas (which might be called, with the first U.S. Afghan War of the 1980s in mind, the Soviet strategy). The underpopulated parts of the countryside would then undoubtedly be left to Hellfire missile-armed American drone aircraft. In the last week, three U.S. helicopters -- the only practical way to get around a mountainous country with a crude, heavily mined system of roads -- went down under questionable circumstances (another potential sign of an impending Soviet-style disaster). Across the country, Taliban attacks are up; deadly roadside bombs or IEDs are fast on the rise (a 350% jump since 2007); U.S. deaths are at a record high and the numbers of wounded are rising rapidly; European allies are ever less willing to send more troops; and Taliban raids in the capital, Kabul, are on the increase. All this despite a theoretical 12-1 edge U.S., NATO, and Afghan troops have over the Taliban insurgents and their allies.

Finally, the New York Times revealed that the President's alleged drug-kingpin brother, Ahmed Wali Karzai, whom American officials regularly and piously denounce, is, in fact, a long-term paid agent of the CIA and its literal landlord in the southern city of Kandahar. If you were a Taliban propagandist, you couldn't make this stuff up.

(Adapted from Harper's and TomDispatch news updates.)
Posted by MarcLord at 11:23 AM 5 comments:

Labels: Afghanistan, The Places in Between 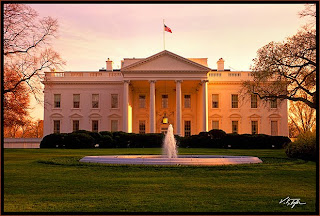 White House Moderates Position On Protected News Sources
Call it the Judith Miller Law, but here's a first tangible move toward re-charging a First Amendment effectively trashed by perpetual Fake War footing and the threat of reporters going to jail while protecting confidential sources. The impending compromise gives more discretion to individual judges in deciding when it is in the public's interest to protect source identity.

It doesn't take a genius to predict that a flurry of appealed Supreme Court-bound cases will surely ensue, but the implications for increased transparency are positive. Whistle-blowers won't have to risk as much, so the flow of information to reporters will open up a bit. Not to expect Edward R. Murrow to resurrect or anything, but it's the first bright spot for traditional news reporting in a long time. It could even have commercial benefits--the news media seldom ruminate on how we The People might be buying less because they're putting out crappy, weakly-reported product.

The White House had been holding the hard-line status quo, and President "Make Me" Obama deserves an attaboy for giving some ground:

“We expect this proposal to move forward with bipartisan support, and the president looks forward to signing it into law,” said Ben LaBolt, a White House spokesman, who noted that the Obama administration was “the first administration in history to support media shield legislation.”

The protection would apply not only against subpoenas for reporters’ testimony or information but also against investigative efforts to obtain phone and Internet records to find out who had been talking with them.

Under the agreement, the scope of protection for reporters seeking to shield the identities of confidential sources would vary according to the nature of the case: civil, criminal or national security.

In civil cases, the litigants seeking to force reporters to testify would first have to exhaust all other means of obtaining the information. Even then, the judge would apply a “balancing test,” and the burden would be on the information seekers to show by a “preponderance of the evidence” why their need for the testimony outweighed the public’s interest in news gathering.