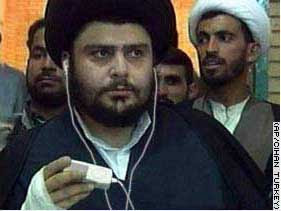 The Leader Of Iraq
In a previous post I mentioned that elements of the Al-Mahdi Army (JAM) had clashed with US forces north of Baghdad, and I interpreted it as very bad news for The Surge. Here is a glimpse into Iraq's possible future. This briefing on the Sadrist party, and why it will one day run "The Rump" of Iraq, was written by markfromireland, a former UN peacekeeper who lives in Iraq. It is available in full at Gorilla's Guides, and you won't find better analysis of Iraq's internal situation anywhere, at least not in English. The Sadrists earned the respect of the Iraqi people by delivering security and welfare, and by reaching out to the Sunnis and sending both supplies and fighters. Ironically, Moqtada al-Sadr is a dedicated nationalist who is also anti-Iranian:

"The falling out between the Iraki Shia political establishment represented by green zone government Prime Minister Nouri al Maliki and Muqtada al-Sadr’s movement has reopened interest in the Shia nationalist leader. It has been clear for some time the U.S. “surge” has as a major goal the elimination of Al Sadr’s political movement which is backed by an irregular force the “Jaish Al Mahdi” (”Mahdi Militia”, henceforth JAM). )

Muqtada Al-Sadr is is the fourth son of Grand Ayatollah Muhammad Sadiq as-Sadr, who was assassinated by Saddam Hussein’s Ba’ath Party in 1999 because of his blunt criticism of its policies. The remainder of his family - including two of his older brothers Mu’mil and Mustapha, his uncle Ayatollah Mohammed Baqir al-Sadr was murdered by Ba’ath Party operatives in 1980.(His other brother now lives as a recluse studying religious texts)

His political movement, or trend, is one of several blocs competing for dominance within the majority community and positioning themselves for when the Americans are forced out of Irak. For present purposes I intend to concentrate upon four trends or blocs.

They have demonstrated considerable ability to mobilise and to assume control of important population concentrations. At present they control Sadr city, some areas of Baghdad, and various population centres in the governorates in particular the southern governorates. They are attempting to establish or strengthen their control of centres such as Samawah, Nasiriya, and Diwaniyah. Thereby striking at the power centres of Dawa and SIIC.

By taking the initiative in Shi’ite neighbourhoods and cities, establishing militias to maintain order and security after the disintegration of authority, and providing welfare and health services, they have made a strong bid to lead the Shi’ite community in Irak. Additionally they can draw on the rich heritage of political and religious thought created by the late Grand Ayatollah Muhammad Sadiq as-Sadr.

The Sadrist trend’s bid for leadership is strengthened by its strongly nationalist stance, which in the eyes of many gives it a credibility lacked by organisations such as the Dawa party and SIIC that are closely linked to Iran. Moreover much of its leadership such as the recently detained (and subsequently hastily released) Sheikh Nasser al-Saadi, can, like al-Sadr himself genuinely claim to have resisted the Ba’athist government when others remained silent or moved out of Iraq. (See sidebar for an example)

Al Sadr is now the major player on Irak’s political stage. He was always going to be prominent but a combination of political skill, American hamfistedness, and successive ruinously ineffective puppet governments in the green zone have combined to ensure that he and the JAM are stronger than ever. In the instability and chaos created by deliberate American destruction of the instruments of government, al-Sadr acted. He sent his followers into the streets to supply residents with food and with water. He sent his militia onto the Baghdad streets to maintain a modicum of social order and security for the populace all the while denouncing the United States invaders in general and the Coalition Provisional Authority (C.P.A.) in particular. Nor was these operations confined to such parts of the capital as Sadr city, Al Shula, and Kadhimiya, similar operations were conducted in, Kut, Amara, Nasiriyah, East Baghdad, Karbala, Kufa, Najaf, Basrah, and Samawa to name but a few.

This prompt and effective action particularly in the vast and densely populated Sadr city earned him and his followers considerable kudos amongst the populace and is the basis of the position of power that he retains to this day. By the time the C.P.A. headed by self-styled “terrorism expert” Paul Bremer recognised that he was a threat to their plans for Irak it was already too late.

Their first attempt to rid themselves of al-Sadr failed as miserably, as completely, and as predictably as everything else the Americans have done in Irak. Like the Soviets in Afghanistan the failure sprang from an attempt to impose an alien ideology onto a people at the point of a gun. Following the “Foolish Bremer” editorial Bremer, who is singularly devoid of amour propre sent American troops on March 28, 2004 to shut Al-Hawza down. The pretext Bremer used was that the paper was inciting the population to violence against the invaders.

The next step was to detain one of al-Sadr’s chief lieutenants on an April 2003 murder charge. This was seen both by the Sadrists and the populace at large for what it was. An attempt to punish Al Sadr. He responded by calling for and getting a civil disobedience campaign reasoning that doing so would provoke the Americans to yet further folly. This calculation turned out to be correct. On April 4th Bremer issued a second arrest warrant this time for al-Sadr himself using the same April 2003 murder charge used against his lieutenant as the pretext for al Sadr’s arrest. Al-Sadr and a large part of his militia fortified themselves in Najaf and al Sadr expedited his fulfillment of promises he had made to the fighters resisting the American rape of Fallujah. JAM fighters and supplies streamed west.

The fighting however was not confined to Fallujah and Najaf, JAM forces engaged Badr brigade (SCIRI) and Kurdish peshmerga “Iraki” soldiers throughout Irak. As predicted by those who had seen them in action against determined opposition they performed miserably and were forced to call upon the Americans for support. - A pattern that has remained the case to this day. This open uprising caught the Americans by surprise and proved, if further proof were necessary, that the military defeat of America in Irak was only a matter of time. The Americans backed down. Despite Sanchez’s bluster that al Sadr would be captured or killed the JAM fought the Americans to a standstill and his popularity surged.

Smarting under their defeat the Americans sought another round. In August 2004 hostilities recommenced throughout southern Iraq, JAM fighters engaged invader troops in Basrah, Amara, Nasiriya, Kufa, Karbala, Najaf, and Sadr City. In Najaf pausing only to take his personally signed pair of Bremer’s Booties® from his mouth Colonel Anthony Haslam, commanding officer of the 11th Marine Expeditionary Unit in Najaf announced to a rapt audience of embedded western journalists that he was preparing to “root out” Al Sadr once and for all and that the forces under his command were;

“making final preparations as we get ready to finish this fight that the Moqtada militia started,”

Those whom God would destroy he first permits to afflict themselves hubris and the good Colonel’s words proved as meaningless as every other piece of flagrant propaganda churned out by the truckload by the U.S. military in Irak.

Given the odds against them the JAM performed surprisingly well a function of their willingness to sustain casualties without running away. All the Americans succeeded in doing was in blooding them and increasing their unit cohesion."