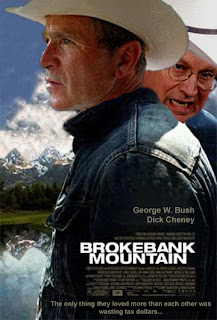 Cheney's Office Going To "Cash-Only" Plan
I guess the VPOTUS has to get a shipment from the Federal Reserve currency truck. Or maybe they'll just move one of their dollar-printing presses directly to his secure location.

Senate Democrats moved Tuesday to cut off funding for U.S. Vice President Dick Cheney’s office in a continuing battle over whether he must comply with national security disclosure rules.

A Senate appropriations panel chaired by Democratic Sen. Richard Durbin refused to fund $4.8 million in the vice president’s budget until Cheney’s office complies with parts of an executive order governing its handling of classified information.

At issue is a requirement that executive branch offices provide data on how much material they classify and declassify. That information is to be provided to the Information Security Oversight Office at The National Archives.

Cheney’s office, with backing from the White House, argues that the offices of the president and vice president are exempt from the order because they are not executive branch “agencies.”

The funding cut came as the appropriations panel approved 5-4 along party lines a measure funding White House operations, the Treasury Department and many smaller agencies.

It may be time to raise the Threat Level to "High."

(research cred to Cryptogon)
Posted by MarcLord at 1:55 PM