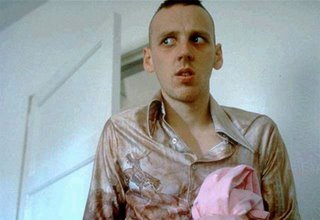 Yes, America, You Can Un-Shit The Bed!
It's come to this, now: Jonathan Chait, an Establishment writer who poses as a liberal-leaning smarty-pants, and who wields his mighty pen for hoity-toity publications I've forced myself to read on occasion, has called for the return of Saddam Hussein in an LA Times Op-Ed piece:

Restoring the dictator to power may give Iraqis the jolt of authority they need. Have a better solution?

It goes on from there, and there is a chance he means it as a comedy piece, but I don't think so:

Restoring the expectation of order in Iraq will take some kind of large-scale psychological shock. The Iraqi elections were expected to offer that shock, but they didn't. The return of Saddam Hussein — a man every Iraqi knows, and whom many of them fear — would do the trick.

A large-scale shock. Huh. Yeah...obviously killing 600,000 thousand or so Iraqis (oh, well, who's counting?) wasn't enough to shock the benighted savages into docility. We need to bring back Saddam, who did such a good job for the CIA until he went off the farm after we attacked him. Silly bugger didn't know his place. That'll teach him to turn down Pizza Hut franchises.

Comedy or not, Chait came out and stated the perfect Companion Meme to the burgeoning "Blame The Iraqis For Their Problems Meme," currently being passed around the think tanks, which made its way through the strenuously Darwinian process of cocktail party discussions devoted to crafting the most artful mask to put on the face of massive failure. Both memes are implicit in the messages Bush and Cheney just delivered to Iraq's elected leaders (gag#bullcrap!#hack) and to interested parties in the region: "Well, old boy, if you can't govern your own people, then you shouldn't really have a government, should you? Best get cracking on the insurgency, wot-wot? Those Swiss bank accounts can be awfully dodgy, you know."

Now I'm certain the US forces are pulling out of the Sunni Triangle. Sunnis will be paid in oil for their blood, to counter the Shiite mullahcracy. The picture above is from the movie Trainspotting, when the character got wasted, slept in his girlfriend's house, and copiously lost control of his bowels during his sleep. He attempted to hide the incontinent evidence by folding up the corners of the sheets and carrying the bundle past the family in the breakfast nook. It didn't end well.

Today is my lucky day :)
Apple is giving review copies of iPad to 100 lucky person. Go to http://bit.ly/cmmVr7 and apply for it.