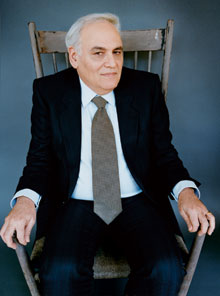 It's All Part Of My Neocon Fantasy
The people who used every sweet-talk and lie possible to get the US to invade Iraq and predicted "a cakewalk" are now blaming Bush for blowing the invasion on technicalities. Chief among their arguments is that he relied too much on the advice of Condoleeza Rice.

Translation: the Necons have filled their coffins full of their native Transylvanian earth, are speaking through their agent in the upcoming issue of Vanity Fair (in an article cheekily titled Neo Culpa), and have set those coffins in ships to sail for the Democratic Party. The Neocons are about to become Neoliberals. Bless the holy water and sharpen the stakes.

Update: Richard Perle, pictured above (yes, he could play a credible vampire, and his nickname is "The Prince of Darkness") has rushed to hedge his bets in the National Review, saying:

"Vanity Fair has rushed to publish a few sound bites from a lengthy discussion with David Rose. Concerned that anything I might say could be used to influence the public debate on Iraq just prior to Tuesday's election, I had been promised that my remarks would not be published before the election.

I should have known better than to trust the editors at Vanity Fair who lied to me and to others who spoke with Mr. Rose. Moreover, in condensing and characterizing my views for their own partisan political purposes, they have distorted my opinion about the situation in Iraq and what I believe to be in the best interest of our country."

Yes, Richard. We really are all against you.