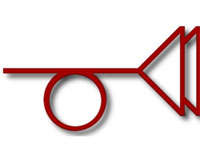 We Await Silent Trystero's Empire (W.A.S.T.E.)
Thomas Pynchon has a new novel, 'Against the Day.' It's set between the Chicago World's Fair of 1893 and the aftermath of World War One. Here's how the author describes his book: "With a worldwide disaster looming just a few years ahead, it is a time of unrestrained corporate greed, false religiosity, moronic fecklessness, and evil intent in high places. No reference to the present day is intended or should be inferred." Right. I'm going to Barnes & Noble to buy it after hitting the "Publish Post" button.

Yoyodyne is a fictional defense contractor introduced in Thomas Pynchon's V. (1963) and featured prominently in his novel The Crying of Lot 49 (1966). Described in the latter book as "a giant of the aerospace industry", Yoyodyne was founded by World War II veteran Clayton "Bloody" Chiclitz. The company has a large manufacturing plant in the fictional town of San Narciso, California.

The name was adopted in The Adventures of Buckaroo Banzai Across the 8th Dimension as the name for a defense contractor. In Buckaroo Banzai, Yoyodyne's corporate offices features the sign, "Where the future begins tomorrow." Yoyodyne is a front for a group of red Lectroid aliens, all with the first name John, that landed in New Jersey in 1938, using the panic created by Orson Welles' War of the Worlds radio play as cover.

Numerous props in Star Trek series, such as control panels and dedication plaques, indicate that parts of Federation starships were manufactured by Yoyodyne Propulsion Systems, or YPS. Often, these notices are too small to be visible on a television screen, or can only be observed by freeze-framing. Yoyodyne is also a client of the law firm Wolfram and Hart on the TV series Angel, a spin-off from Buffy the Vampire Slayer.

Many technical works, such as Cricket Liu's DNS and BIND (O'Reilly), Per Cederqvist's Version Management with CVS, Jesse Vincent's RT Essentials (O'Reilly), and the GNU General Public License use Yoyodyne as a company name in their examples. The Internet domain name, yoyodyne.com[1], was allocated by internet software designer TGV Inc. as a "fake" domain name for use in DNS configuration examples.

The first Internet-based direct marketer, Seth Godin, founded a company called Yoyodyne which was acquired by Yahoo! in 1998. [2].

Also, there is a non-fictional company called Yoyodyne that manufactures and sells high-performance and racing motorcycle parts [3].