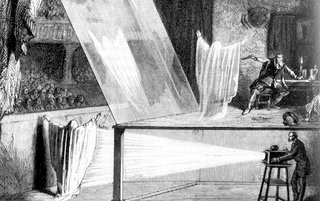 Then from his secret Art the Sage Vizier,
a Magic Mirror made; a Mirror like
the bosom of All-wise Intelligence,
reflecting in its mystic compass all
within sevenfold volumes of the World involved
and looking in that Mirror's face
the Shah beheld the face of his Desire.
The term "smoke and mirrors" refers both to an optical trick used to terrify audiences with strange images and to divination employing reflective surfaces. These arts are ancient, I suspect far moreso than we know. Lucas Arts special effects and a pundit class now beamed to us through space have made us forget the connections to old trickery, but the conjuring skein is unbroken, the joy in deception the same; the important things have always been practice, knowledge of human prejudices and blind spots, and to keep the oft-difficult techniques of projection refreshed and secret for as long as possible.

In the relatively recent Roman Empire, the readers of mirrors were called the Specularii. In Greece, St. Augustine reported how the witches of Thessalonika used human blood to write oracles upon mirrors, and that this practice had been passed down to them from the unspeaking eons. In Victorian-era plays smoke and mirrors were commonly used to project ghosts onto the stage, and they're probably still used today to spice up creepy late-night campfire tales, as they were in my youth. Using a small mirror and a torch, you can make faces play in the smoke, and make suggestible, giggly, and over-tired boys believe in things which aren't there. It helps that they want to.

Invading Iraq was a magic act. In political terms, it really was. Smoke and mirror techniques were knowingly applied by political sorcerers who took our present and future wealth, and they're reduced to reaching for rabbits. For awhile, the audience which is our country was made to see things which weren't there, and I suppose it should be forgiven its initial gullibility. Now the entire world (except Fox News and a disturbingly large number of ignorant, bloodthirsty galoots who actually enjoy this) has noticed the old magic stand-bys have gone horribly wrong, their promise of a glorious grand finale is gone, and we see the lovely assistants really were sawn in half in those wooden boxes because all those entrails onstage are coming from somewhere. It started off as a spectacular show and many of us cheered it on. But we were promised magic, dammit, and sometime, during pathetic diversions from blithely sadistic blunders, we've begun to wonder: "How much trouble are we in, and can I get us out of this theater alive?"

If Specularii give bad advice, and if failed magicians refuse to leave the stage, what do you do? You discredit them, and start throwing things until they get the hell out. I held off on defrauding them, because far better people than me have been trying; everybody, deep down, wanted their tricks to work and no one wanted to admit how bad they were. I'm that part of the crowd which triggers the radical middle, and I know it's time to start throwing rotten tomatoes. No amount of reassurance, curtains, or denial can hide the ugly centerpiece of their act, and a con-man's reliance upon audience decency, always presumptuous, has become real abuse. If you dare to look at what they've been trying to divert our attentions from, it's on the video below. It's fifty minutes long. SwimDeep over at Deep Confusion posted it last week; it's been around for awhile, the kind of thing the large, respectable blogs have shied away from. Studious, analytical, and articulate business owners, government ministers, historians, and teachers will explain why the trick's techniques worked, and why the act has not. If you prefer magic, don't watch it.

"...it's been around for awhile, the kind of thing the large, respectable blogs have shied away from."

Does that mean I'm now in disrepute?

Man,oh man you are a good writer Marc. Can you come over and edit my life? Thanks for posting this and giving it a bit more light. I am growing into an ABH fan. Thanks.

Yes, I guess you're in disrepute, but it probably won't be for long. There are lots more behind us. The flattery is always welcome, and I'll come edit your life if you describe mine.

I have wondered why this vid and a few others like it, extremely well-reasoned, researched, and done as it is, are still seen by places like FDL as "pet theories" when they're really at the deepest root of what BushCo is about. I think bloggers who are struggling to build constituencies are afraid of looking looney, or perhaps 9/11 is still in their blind spots. The gamble for oil should not be, and Peak Oil definitely should not be. Peak Oil has governed every US foreign policy decision, and most domestic, for at least the past 10 years.

I honestly can't see how HuffPo, MyDD, or various other sites can drum up solid support for far-reaching policy change without starting to pay attention to the three major movements which are antithetical to BushCo: Better Energy, Local Growth, and Preventative Health Care. Until they start to break the oil myth (and the oligopoly it's attached to) none of these things can be achieved. We're just switching paymasters.