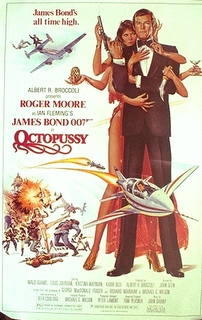 Octopussy: Billmon's Take On Neocons And Changing the Course
Billmon was once a real journalist and now works on Wall St. It's his business to see through the Bullshit Curtain. He's one of my most respected sources of thought anywhere (see his link over at the left under "Real Stream Media"), and below is what he thinks should be done with the neocons. Obviously, I agree, or I wouldn't be quoting it in full, and I'm doing so as a warning: the neocons will return. Their failures will not dissuade them in the least, and they will continue to seek to start a Clash of Civilizations, World War Three or Four or whatever their damaged brains wish to call it. If they are not purged by trial, exposed, or even "brought to justice," the course can't truly be changed, because they will follow their vision to its nasty conclusion by whatever means they can devise. And this country needs a long hot shower with lots of soap and scrubbing. I promise you that, as with all cultists when they fail, the Neocons' next try will rely on means more extreme.

Like everybody else, I don't know what's going to happen today, but this election has already illuminated one critical truth: The modern GOP -- or, more specifically, the axis of '70s campus Republicans now running it -- really is just a criminal enterprise disguised as a political party.

Dirty tricks, large and small, are a sorry fact of life in American politics, but what the Republicans have done over the past few weeks -- the surrealist attack ads, the forged endorsements, the midnight robo calls, the arrest threats, the voter misinformation (did you know your polling station has been moved?) -- is sui generis, at least at the national level.

Even Dick Nixon never tried anything like this on such a grand scale -- although, of course, he also didn't have the technology. The only thing we haven't seen yet is a break in at DNC headquarters. And if the Rovians thought they could get anything out of it that would be useful in this election (nobody else has) we'd probably be reading about that, too.

It's always possible to point to Democratic/liberal offenses, but at this point the comparisons look pretty silly: some downed yard signs here, a few crooked and/or stoned ACORN canvassers there. Not even in the same universe, much less the same ball park.

Couple the GOP's rat-fucking campaign with all the other stuff we already know about -- the collectivized bribery of the K Street Project, the Abramoff casino extortion ring, the Defense and CIA appropriation scams, the Iraq War contracting scams, the Pacific Island sex trade protection racket, the church pulpits doubling as ward halls, the illegal wiretapping, the lies, perjury and obstruction of justice in the Plame case (I really could go on like this all day) -- and it's clear that what we need most isn't a new Congress but a new RICO prosecution, with lots of defendents and unindicted co-conspirators.

There's probably not much that can be done on that score, even if the Dems take both houses of Congress today. Oversight hearings and subpoenas to appear are all well and good, but what we really need to see is a heap of good old-fashioned law enforcement. I want to see the Rovians testifying in courtrooms, not hearing rooms.

If, by some fluke, the Democrats were to recapture the White House, they would be well advised to go after the Rovian machine in roughly the same manner that the Russian government went after the old Communist Party after the failed '91 coup. Personally, if it were up to me, I would declare the GOP an illegal organization (as the CPUSSR was) and let honest Republicans go regroup under a new, hopefully non-criminalized brand name -- like, say, the Detox Party.

That, of course, will never happen, but if the Dems don't turn the full weight of the FBI, the DoJ and the IRS loose on the Rovians the very first chance they get, they'll just be asking for it. The Octopus will have it tentacles wrapped around throats again so fast it will make their tiny little brains pop.

And next time, they might not be so easy to peel off.

The Neo Cons started out as "Team B" in the 70's. They morfed into the "Committee on the Present Danger" and used Henry "Scoop" Jackson as their host until the Reagan election.

The "realists" have taken back control of the Republican Party and the Neocons are now in the process of linking up with the DLC and the AIPAC congressional membership. The battle now is between the DLC/Neocons/Rahm Emmanue/Marty Peretz and the "internationalists" for the soul of the DP. The goal is to keep the "internationalists" of the DP from linking with the "realists" of the RP. The ultimate goal is to prevent a repproachment between this alliance and Iran.

The neocons are not gone by a long shot.

I hear you, big-time. (Next time pls leave a name so I can acknowledge or contact you.)