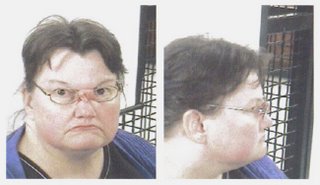 Hoyer House Majority Leader
The picture above sums up how I feel about Steny Hoyer as incoming House Majority Leader. Murtha (who I thought was going to get the position) may be corrupt, but he took a brave, bullshit-free stand on Iraq, and he's old-school corrupt. Corrup on a small scale, in which he looks out for his real friends and family. Nepotism would be the legal term.

Hoyer is new-school corrupt. He is a leading shill for K-Street lobbyists, he doesn't have real friends, and the legal term for what he does is bribery. Here's about all you need to know about Hoyer: he let banks write the recent bankruptcy legislation (literally); you know, that's the new law that takes bankruptcy protections away from private individuals. It lets companies seize anything of value, sell it, and apply to outstanding loans. It's known as the Credit Card Law. So, now, when people start to fall behind on their payments, the credit card companies get to raise their interest rates over 30% because...they can!

The choice of Hoyer is a win for old-style Democratic machine politics, and signals a desire to strengthen ties with lobbyists. Dims really suffered for the last 6 years, since Tom Delay's K-Street Project was wildly successful and effectively shut them out of corporate largesse; by some calculations, almost 90% of all corporate donations to Congress were to Republicans in that time frame. The Dims deserve their turn at the trough, I guess, and relieved lobbyists are throwing away their bibles and toning down their fake drawls. The closed-door negotiations over Murtha and Hoyer went on for a long time, so hopefully some good trades went on. Like maybe, for some ass-whupping Oversight. I'd bet that Nancy Pelosi got the ability to go after the Iraq screw-ups in return, and hopefully, starting early next year, a guy named Henry Waxman is going to be holding hearings into Iraq corruption. He'll start with the little players and work his way up. If something like this does not happen, and soon, our country is kaput.

Hoyer is still disappointing, but something good may well come out of it. (Note, the picture above is of a woman who was arrested for having a relationship with a 13-year old boy. So...I guess they're not all Mary K. Le Tourneau.)
Posted by MarcLord at 4:58 PM

Speaker Pelosi stood up fro Murtha. I respect her for theat. Not the thing is "party unity." I vote for that.

Well, there's unity, and there's a Democratic version of it. Guess this is it.