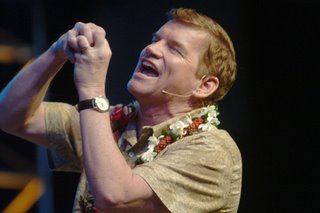 Preserving A Moment
I try to run a relatively clean blog here, and even assume that my son (a.k.a. Lord Baby) might be reading the archives someday, not to mention the fact that my mom (hi, mom) is a regular reader. I try not to get distracted by tempests in teapots. But sometimes things pop up in a given day which genuinely make me scratch my head. To wit, yet another Reich Wing sex scandal. Keeping count has been a challenge the past month or so.

I want to know: when did hypocrisy and having some kind of shameful fetish become required parts for playing a wingnut-slash-demagogue? (Can't some of these preacher twerps get religion from an honest angle?) This has been getting way beyond the Jimmy Swaggart-Tammy Faye Baker level of hypocrisy, and lately the same kind of scandal keeps resurfacing with different names, accusations, and acts. I mean, what the hell is up with these people? I don't even know who this stupid Haggard bastard in the picture is, or whether he's a "fag" flaming away in the closet or not. How much does that matter, given the picture, and what he is? Yeah, yeah, it's all coming up now because of the vast left-wing conspiracy. Exactly. But sometimes it makes me wonder if a Gay Mafia has infiltrated the religious right for its own protection, and coincidentally, Ralph Reed has been looking damned fetching to me in a cute, innocent kind of way.

A male prostitute alleges that he had a three-year relationship with prominent right-wing evangelical leader Ted Haggard, who has said that homosexuality is a “sin” and “devastating for the children of our nation and for the future of Western civilization.” Haggard denies the allegation.

Haggard is president of the National Association of Evangelicals, representing more than 30 million conservative Christians. Time Magazine ranked him as one of the 25 most influential evangelicals and Harper’s contributing editor Jeff Sharlet noted, “No pastor in America holds more sway over the political direction of evangelicalism than does Pastor Ted.” Watch the report from Denver 9News...