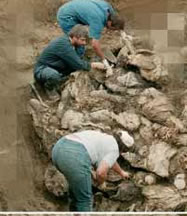 "When They Can Stand Up, We Can Stand Down:" Myth-Busting Pt. II
The Iraqi police and soldiers we train aren't going to bring peace to their country, they'll bring fire and sword. There are no police and there is no army that will do our bidding in Iraq or in Reality, and we've been doing nothing but arming militias and death squads. You know those men the news stories always describe as "dressed in uniforms" of cops or soldiers, the ones who've been attacking, kidnapping, torturing, and executing tens of thousands of civilians? Yeah. Those unknown banditti who come out of No-Where. They're not terrorists in costumes, they ARE the cops and soldiers we've trained and paid. Our tax dollars clothed them. Our bonds armed them. For the record, this is their version of "standing up."

"Stand up so we can stand down" is a pathetic pipe dream, a tale told by jagged-out idiots huffing ethylene. We've been putting out fire with gasoline while washing our bloody hands with sulphuric acid. Here, smoke another doobie by all means, because it hurts like hell and I'm ashamed to be part of it. But remember, when you hear the Preznit or Congress or the talking heads speak as if we're in control, super-impose a clown face on them. Control?? When it comes to Iraq, they're in control of Fuck and All, and All just left.

Today was the best day the US will ever have in Iraq. Tomorrow will be worse. The day after tomorrow will be worse than tomorrow. As I write this, the Sunnis in the Iraqi Parliament are probably deciding to leave the government, and the civil war is about to escalate faster. A lot faster, into full-blown genocide. The only "political solution" is to wall it off and keep letting the refugees stream out of it (2-3 million of whom have left already), and to give them food and shelter. It's time to simply get the hell out before the supply lines are cut. Get ready to Adopt An Iraqi Today.

(Picture of mass grave excavation, one of hundreds in the former Yugoslavia, this one near Banja Luka prison.)