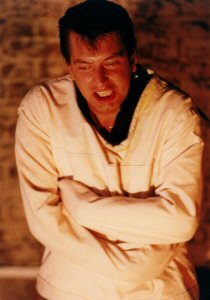 Blair--OK, That Was Wishful Thinking About The Meds
As the song goes, "Nobody does it better...but sometimes I wish someone would." Blair gave a lesson in triangulating without a net today, before his video conference with the Iraq Study Group (ISG). Allow me to translate his pronouncements.

'Because much of the militancy in Iraq comes from outside its borders, Blair said a "whole Middle East strategy" was needed to counter it.'

Translation: We are now failing utterly in the entire Mid-east.

'Resolving the Israeli-Palestinian conflict must be the core of such an approach, he argued, followed by efforts to stabilize Lebanon and unite moderate Arabs and Muslims behind a push for peace in those countries and in Iraq...'

Translation: Israel, you're not too big for a proper spanking.

"A major part of the answer to Iraq lies not in Iraq itself but outside it, in the whole of the region where the same forces are at work, where the roots of this global terrorism are to be found, where the extremism flourishes."

Translation: Please, in the name of Alice in Wonderland...make it stop.

The West must reiterate demands that Iran cease its support for extremists and suspend its uranium enrichment program. "Or alternatively they face the consequences of not doing so — isolation," he said.

Translation: Name your price, I am ready to pay you now. Will you take a cheque?

Update: While riding home with me and listening to the BBC's transmission of Blair's speech, Lord Wife observed of the Consequences of Isolation: "Yeah, they'll be so lonely with all that oil, plus they won't be able to speak English to anyone. Clearly they must surrendur."

You got blair all wrong. He has his tail between his legs. Check out this most-excellent blog, to see why Blair called mummie.