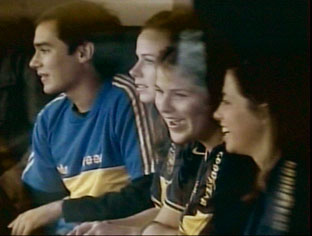 First Daughters Invade, Occupy Argentina
Jenna and Barbara Bush have been camping around in South America. Clearly, this is where their family's future lies, and it looks like they've been detached to bring US influence back to its rightful, pre-eminent place in America's southern hemisphere. I must say their methods are quite refreshing. Unorthodox, when compared to their family's methods in the Mid-East and elsewhere, true, and all the more refreshing for it.

They've been buying land in Paraguay, celebrating their birthday together (they're twins, after all), dining with Presidents, ducking their Secret Service escorts to teach orphans and run naked down a hotel hallway, uncharacteristically giving their purse and cell phones to the poor, and getting one of their minders savagely beaten. Some would construe these acts as merely confused, hormone-drenched sluttery, but I see them as sheer genius, a means of controlling wayward regimes in a diabolical and possibly novel way: by having so much fun and grabbing so many embarrassing headlines host governments surrendur and beg them to leave. The strategy appears to be working. For example, the President of Argentina and the new US Ambassador there just sued for peace. I for one see a sinister hand in this: "Ok, we'll leave, but you'll have to listen to Mr. Kissinger's demands first. Here, he's on the cell phone."

Despite the Bush twins' soft-power innovations, they share some distinct parallels with more familiar, one might say time-honored, Bush family methods. There's the love of a good party, of course. There's the trademark tenaciousness, which may occasionally manifest itself as staying the course in the face of all warnings and evidence, no matter how dire. And then there's the deliberate vagueness about timelines. But they certainly seem to making progress on our behalf in South America, and for that they should be commended. Who knows? Maybe they'll make time for Venezuela.
Posted by MarcLord at 1:06 PM