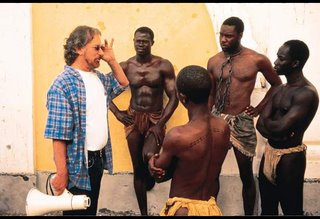 The Economics Of Colonialism
"The old-fashioned slave trader told himself that he was dealing with a species that was not entirely human, and that he was offering them the opportunity to become Christianized. He also understood that slaves were fundamental to the survival of his own society, that they were the foundation of his economy. The modern slave trader assures herself (or himself) that the desperate people are better off earning one dollar a day than no dollars at all, and that they are receiving the opportunity to become integrated into the larger world community. She also understands that these desperate people are fundamental to the survival of her company, that they are the foundation for her own lifestyle. She never stops to think about the larger implications of what she, her lifestyle, and the economic system behind them are doing to the world--or of how they may ultimately impact her children's future."

"The present war is most emphatically only the beginning of a long historical development, at whose end will stand the defeat of England's world position...(and) the revolution of the coloured races against the colonial imperialism of Europe."

Dude, i totally for got to send you those cds on perkins. sorry dued.