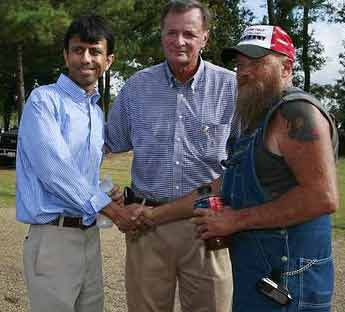 The Republican Party's Head Is Examined
One cold and wet night about four years ago, I was listening to the radio, driving near my house. A professor was talking public policy with an audience at Town Hall, speaking with scholarship, clarity, authority, and humor; I pulled over and turned up the sound. "Geez," I thought. "Why can't somebody like this guy be President? Dream on, kiddo." I listened to the end of the program just to find out the gent's name: Barack Obama. Four years and many downpours later, the Novelty Generator that is my country has thunk the unthinkable. As blogger Frank Paynter at Listics remarked, "Historic? This beats the effing moon landing."

We're in a new era. For the first time in 49 years, a Texas Oil Man is neither the President nor Vice President of the United States. The only civil war being fought so far, one which tempts an urge to incivility, is between the Whack Jobs (Palin Wing) and the Gippers (Noonan Wing) in the Grumpy Old Party, which the Whack Jobs are destined to lose. Their war is a good thing for all of us, being one only of ideas, and what emerges will figure out how to win the mainstream back. Being right under their nose, there's a decent chance they'll find the answers, and the upshot is this: Republicans can do Progressive Politics, too. Call me crazy, but the GOP will soon cast itself as the Party of Small Business.

Consider, if you will, Newt Gingrich. He's a genuine intellect, was the leader of the Republican congressional takeover in 1994, the architect of the "Contract With America." He was an extremely prolific fund-raiser and earned the loyalty of his peers by sharing the wealth generously. Christians love him. Business people love him. He's a master of crafting agendas, and he is going to wind up running the Republican Party.

The GOP as a whole worships authority. That's what the God Thing in the Base is about. While managing those impulses can be tricky, Gingrich grasps the absolutely tremendous potential for positive activism that's scurrying around in there, and he's got the smarts and the bona fides to bring it out. The departure from the current GOP will be radical, it needs to be, and the exit won't turn in Palin's direction. It will far more likely be a mirror image of Obama Community Activism. Gingrich has suggested, for example, that kids be paid for getting good grades. He has held forums on health care, communities, and the environment. And he came within a hair's breadth of being the real kingmaker in this election.

Gingrich wanted McCain to pick Bobby Jindal, the Louisiana governor, as his running mate. Jindal is a Rhodes Scholar of Punjabi/Indian descent, a convert to Catholicism who has convincingly testified to his faith in front of numerous evangelical congregations. He's the youngest governor in the country and the blackest in Louisiana's history. Jindal would have noise-cancelled Obama's thunder in terms of race, scholarship, and youthful vigor. If Gingrich had succeeded with McCain, you would've heard cries of despair from here, because the election would've been a lot closer. Or lost. But I trusted Karl Rove's Boys to block Jindal--they won't work with political clay that's smarter than them, and that was their undoing.

The Republican Party has to re-evaluate its environment to re-forge its platform. The environment is sick to death of imperialists (neocons) , radicals (fundies), and thieves (supply-side economists), and the platform begs for a more enlightened, more inward-looking pastoralism. With better fences, and the best Republican course is to steer away from Big Business. They must drag their dream of success back down to a more accessible financial level, precisely where the Democrats won, and be even more aggressive. Gingrich is quite capable of distilling energy policy down into slogans like "We Are The Grid" and turn everybody with a roof into a wind farmer. Meantime, while it's unlikely Big Business will get hit with cap and trade, it's very likely that tax breaks will be used to reward non-carbon sources. Republicans will support that. In fact, Gingrich probably has a better appreciation of renewables than so far exists in the Obama Administration.

The very basis of Obama politics was the hypothesis that small donor contributions could scale up and beat out K Street and large corporations. He was right. The victory will extend with pronounced effect on policy and law, eventually at every level of government. Households like mine saw how changing where the money for politics came from would change the country, so we gave all we could to Barack. Justifiably disaffected people criticized us for being fools, but they're the political Has-Beens who refused to learn that laws are written with money. That's what this election was about: if we pool our money to buy candidates, we'll beat the corporations. There's nothing to stop Republicans from playing the same game.

Obama's victory upended all the old political models, lobbyists are weakened, and every politician in the country knows the jig is up. We are the heralds of the next stage of American Greatness, and Republicans will be swept along. There have been only a few major developmental stages in the sweep of US history: the Founders created a highly scalable federal system; Jefferson sent it to the shining seas; Lincoln nationalized it; Roosevelt socialized it; and Truman globalized it. Now we're going to energize it. Now it's up to the other wing of the Property Party to try and out-dance us at a Second Declaration, and I bet we'll be seeing Mr. Jindal again.
Posted by MarcLord at 11:06 AM

I heard some very young Republican leading light on NPR last night saying the party needs to focus on small business and be the party of aspirational Americans.

We need to keep him away from Newtie-toot-toot, or we'll be in trouble.

His name is Reihan Salam, and he sounds way too smart to be a Republican.

Newt is now the remaining center of gravity in hiw Party. He's brilliant half the time, a nut case the other, and that's a 50% improvement.

Like David Frum is smart, only without the evil?

Will check Young Dude out.

A very competent argument, causing me to doubt the inevitability that Obama will face Mitt Romney in 2012. A Bobby Jindal-Newt "Cheney II" Gingrich ticket could be it.

I think what you meant to say is that you sure hope the Republicans don't hitch their wagon to Sarah Palin.

Romney is vapor. No base. And he's too handsome.

Have you accepted Jesus Christ as your personal savior? I'm all fine with that, but I thought so.

Bruce, I have a secret crush on Saracuda. (Don't try to come between us.) Nothing would please me more than having her lead the Republicans. She's perfect. She's the best case scenario and the most unlikely!

I've lately had a little tiff with a former rightie about how 'we' (the left) are going to bring these ('poor') people around, since they are so woefully misinformed; and my answer is that the GOP created this monster, and the GOP, with its superior language-mangling and framing abilities, can figure out what to do with them now that they're all dressed up with no place to go.

For instance, before they're going anywhere, the GOP needs to undo some little quirks in their base which they have carefully nurtured. Like, for instance, how they loathe smart people.

Speaking of which, can you see how Palin (possibly) taking Ted Steven's seat will allow her to undergo a complete intelligence makeover? I predict she will be strutting around in 2011, vanquishing all her critics with all sorts of deep understandings of the ways of Washington? She will be even more unbearable, if that can be imagined. But this is how it will be cool to be smart again for the GOP base.

Karl Rove screwed us with this anti-intellectual bullshit, now it's his party's turn.

I can see your Palin Makeover scenario, but not how she'd ever win the Presidency. Maybe if she can manage to get her oldest kid killed in a war zone or something.

Heaven forfend Sarah Palin ever get anywhere near that job again, no matter what. True, she'll never be able to vanquish *all* her critics, but I'm afraid there will always be a group that will pine after her 4evah and evah, Hearting her with lewd fantasies and nursing bitter resentments.

The arc of Saracuda's political career is settled. Its greatest elevation is behind her. Without a law degree, the best she can hope for is to succeed Ted Stevens as Senator and perhaps a spot as keynote speaker in 2012. But already, even now, hers is no longer a fresh face. Besides, who remembers any defeated vice-president ever even being nominated for president?

I'm good with all that. They'll find something to do with her. After all, republicans never miss an opportunity to make something out of nothing good, and nothing out of something good.