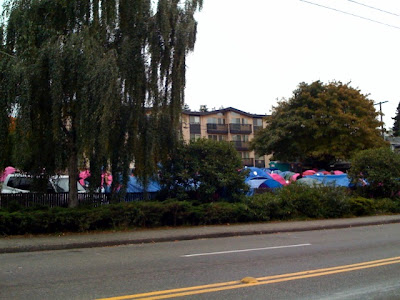 Where Would You Want To Be Homeless?
It would be right across the street from Lord Running Boy's co-op school, and that's where the Nickelsville, named for Seattle's smooth-jazz mayor Greg Nickels, moved to a month or so back. The church which rents out space to the school turned over its profitable pay-parking lot to homeless activists in a perceived emergency. We parents weren't consulted, and some furies ensued. A part of our children's tuition now goes to feed them, in addition to the usual food bank crowd. The teachers are all about anti-fascism and anti-bias, so that first week they naturally took the kids over on a conga line to meet the pastel pink and blue tent-residers in the parking lot. Lord Running Boy's recorded quote: "They're not aliens!"

Many parents were tousled, tempests brewed in teapots, a homeless person was hit by a mini-van, and we expressed our support for the actions of the church and the school. It's not over by a long shot, the legal tussles between the church, city, tent-dwellers and parents might be going on for years. We'll have to deal with more of this, I said, so doctor my eyes, and tell me what you see. I hope you administer humanely. We're thankful our bias-free boy has met the homeless, for they might be us, we might be them, and hope they're not us. Awhile back I drafted a still-born post about it called Depression 2.0, but Still Life Living cooked a better, unflinchingly honest and more current post about what's up:

I regularly talk with my colleagues in a rational manner about what happens if the bailouts fail, where I want to be homeless. Then I point out all the people who are on the front line of our current wave of the melt down.

One wacky friend of mine has made the conscious decision to live out of his car.

Another friend has a University of Chicago MBA who owns his own small business and employs 15 people. He is diligently trying to rescue his business. Mail order sales of plants are off by 90%, but he can't draw on his good credit and he doesn't qualify for a bailout. So some of those families who depend on him will probably end up moving in with relatives or be forced to brainstorm.

As for me, I work in the glass towers of Los Angeles. And it is happening here too. My son’s friend’s father just lost his fancy job at a national law firm because the work is slowing. He is safe until December when he loses his alimony from the guild -- at which point he, his wife, and three kids have to scramble to land a $150,000+ per year job. It is getting harder even for the well educated to get jobs, at least jobs that pay enough to cover the mortgage, insurance, car, and food. With the slowdown, the experts say those good jobs will come back, but it may take three or four years. There is, of course, the chance unless they might be outsourced altogether, in which case they are never coming back. But my son's friend's parents and siblings will be okay, they have family back east.

An artist friend is designing very beautiful, colorful signs saying "Will Work 4 Food". She is betting that people will want to distinguish themselves from the increased competition. I really liked her art-nouveau one. They are really cool. I bought it to give as a christmas present to my friend who is sleeping in his car, but I have reconsidered and will probably just keep it myself. I mean it is really cool.

My company is filled with professional financial analysts and professional economists. No one is talking about the meltdown beyond the superficial, so either they don’t think it is a big thing, or it is too big for them to get their heads around.

The best person I have to talk about this with is my 8-year-old daughter. She has a Kit Kittridge American Girl Doll from 1934. My daughter loved the movie. She has seen a Hollywood-version of a Hoover Camp. She sees the homeless people around, and she can see them as real people because of that movie. She understands that if this magic thing called society contracts, we may be forced to think outside the box and eat in communal soup kitchens. I mean in a worst-case scenario. I don't think she thinks it could ever happen, and I hope she is right.

Nevertheless, I think we should downshift for a depression, grow our own gardens, car pool, eat less and more healthily (saves on doctors visits) — but at the same time work like hell to take democratic control of our shareholder responsibilities in society. I mean, if we are really good, maybe Halliburton will come solve this mess for us. Not in my American Dream. I’m going to have to do it, hopefully with you.

Strange story: a business that is struggling and has not done anything wrong can't get help, but the greedy trip over themselves to get a handout. Today in the WSJ, I see that insurance companies are buying banks so they can get bailed out. I didn't realize how much more surreal it could get than George W Bush, war president.

I take snap-shots of the children, dancing in a parking lot that's filled with tents of light. I yell at them to be careful, but I see nothing in front of me, nothing to the sides, nothing behind, and the old king is dead. Long live the king. A wild and rainy wind is blowing, and I'm not going to judge your cigarettes, the smells, or the drugs. Come on, tell me your stories, show me your scars, and return my son's hellos.
Posted by MarcLord at 10:50 PM

It has all become a surreal nightmare. Fact: none of us know where we will be a year from now. So why are Walmart clerks being trampled literally to death in the stampede to pay for last year's plasma tv which they can't sell any other time of the year? Denial?

Walmart stampede as metaphor...pepole are clinging to the consumption model, even as the extended warranty runs out.

I'd go with Oahu's west side near Laie.