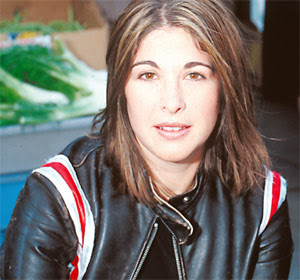 Naomi Klein Is Hot
As a firecracker on the Fourth of July. So, here's the deal...if you entered "Naomi Klein is hot" into a search engine and dropped into here, you owe me a comment. Right after you read her Rolling Stone article, "The New Trough," excerpted below. Funny how the Wall St. bailout looks a lot like Iraq--a "fraud-free zone:"

See if any of this sounds familiar: As soon as the bailout was announced, it became clear that Treasury officials would hire outsiders to perform their jobs for them — at a profit. Private companies wanting to help manage the bailout were given just two days to apply for massive, multiyear contracts. Since it was such a mad rush — after all, the entire economy was about to implode — there was no time for an open bidding process. Nor was there time to draft rigorous rules to make sure that those applying don't have serious conflicts of interest. Instead, applicants were asked to disclose their conflicts and to explain — and this is not a joke — their "philosophy in fulfilling your duty to the Treasury and the U.S. taxpayer in light of your proprietary interests and those of other clients." In other words, an open invitation to bullshit about how much they love their country and how they can be trusted to regulate themselves.

The first major contract to be awarded in the bailout was for legal advice — and the choice Treasury made was Halliburton-esque in its audacity. Six law firms were invited to bid, but four declined, either because they didn't want the contract or because they had too many conflicts of interest. Rep. Barney Frank, chairman of the House Financial Services Committee, said the fact that so many law firms chose not to bid "shows that the guidelines are sufficiently rigorous."

Or it may just show that the bidder who won the contract — Simpson Thacher & Bartlett — takes a more relaxed approach to conflicts than its colleagues. The law firm is a Wall Street heavy hitter, having brokered some of the biggest bank mergers in recent years. It also provided legal support to companies trading mortgage-backed securities — the "financial weapons of mass destruction," as Warren Buffett called them, that detonated the banking industry. More to the point, it was hired to provide legal services to the Treasury in its negotiations to spend $250 billion of the bailout money purchasing equity in America's banks. The first stage of the plan involves buying stakes in nine of the country's top banks. Incredibly, Simpson Thacher has represented seven of the nine: JPMorgan, Bank of New York Mellon, Bank of America, Citigroup, Morgan Stanley, Goldman Sachs and Merrill Lynch.

According to its contract, Simpson Thacher has agreed not to represent any of the banks "against the U.S." when they negotiate with Treasury for the equity money.

There were two kinds of people who wrote, passed, and signed that bailout contract: bumbletwits and goniffs. Naomi Klein, on the other hand, was sagacious enough to decode the shpiel. Her book The Shock Doctrine: The Rise of Disaster Capitalism describes the long prelude to this series of unfortunate events, and it won't put you to sleep. (At least not if you Googled the title.) Her work will endure, she's the Upton Sinclair of international finance, and richly deserves a Pulitzer Prize. Here's the rest of the article and here is her blog. Now tell me why you think she's hot--me, I've always been a sucker for smarts.

uh..I'm not sure how to do this, but if this works, i just wanted to tell you that this hear shit and another post i found

uh, were, like, weird. Gave me a buzz i don't understand, but, well, off to find nekkid pics of Naomi. Somehow, I think you'll unnerstand.

I have not yet searched for the Naked Naomi pix. My bet is she's not that kind of girll, and I would never demean her in that way, but I completely understand.

I've had my eye on her for quite awhile. She was there in Seattle at the WTO meeting in 1999. She was at the the first World Social Forum almost eight years ago in January 2001 in Porto Alegre, Brazil, not just saying another world is possible but showing how to make possible another world. She was there comforting me in my darkest night with the light of hope.

She was there explaining how the present order would crumble and a new order be birthed. It was about redefining democracy to include the economy: deep democracy, participatory democracy, penetrating democracy, throbbing democracy...

Didn't know she was in Seattle in '99. I was, and it would've been great to run (perhaps literally) into her.

"According to its contract, Simpson Thacher has agreed not to represent any of the banks "against the U.S." when they negotiate with Treasury for the equity money."

...and the govenment gets mad when Legal Aid lawyers sue the government for the common person?

And then there was this:

Apparently, during all the "NEWS" baout the bailout, Tresury was busy changing IRS regulations to allow banks to become richer.

I dont know that she was there is body, but she was a significant voice of the time. I am impressed that you were there. Of course, you live there (I think), but I assume you mean "in the thick of it" more or less

They had canisters of pepper spray as big as fire extinguishers. They used so much tear gas they ran out of it.

I wasn't part of any protest group, and was only there on the afternoon of the 3rd day, then the evening of the 4th day when we gathered to protest outside the jail and they finally allowed a lawyer to enter. I wasn't on hand when they turned the buses over, and the only rioting I saw was by out-of-town police and national guard units which had been called in.

You could hear them before you saw them, because they'd tap their batons in rhythm on their body armor as they came. Then they'd round the corner and would start advancing towards any grouped civilians they saw (i.e, me and other concerned citizens). Because they were told to secure downtown and they couldn't do it, didn't get food or refreshment or rest, the cops got very angry. That night was when the crazy stuff went down.

That day ther were were numerous unmarked black Chevy Suburban ram-rodding around, the only vehicles I saw moving in the downtown area. There were also black speed-boats in Elliott Bay, with divers entering and leaving the water. I wish I was making that part up.

I've sat down a time or two to write a post on it, but can't seem to express myself well. I'll try again.

Found the site by typing in "Naomi Klein is hot" in Google! She's on Bill Maher looking hot and talking smart. MMMMM.

I also found this site after typing in "Naomi Klein is hot" after seeing her on Maher, but I've thought that since I saw her in The Corporation. What makes her hot is not just her looks, it's that she has huge brains.

All cats are not black in the dark, and giving and taking pleasure with that fierce brain would be of... enormous consequence.

Naomi Klein is HOT,like Sarah Palin,only she's hell of a lot more stupid and annoying.And the second part has nothing to do with her being Canadian.

Naomi Klein is in fact a hottie. I don't know what it is about her, she's just hot. Totally and disastrously wrong, but hot.

Id rather not leave a comment, but it seems rude not to as you asked.

Yes, she is hot, and I'll be damned if she doesn't look even better in glasses.... Like a hot, brainy Sarah Palin... Oh, if Sarah had only never opened her mouth....

She is a bombshell. Not sure she would like that phrase though!

I typed "Naomi Klein is not" after seeing her talk on MSNBC with Chris Hayes via a HuffPo repost about the thing going on up in WI and how it all fits the same thing she was talking about in Shock Doctrine, and the protesters know it as it is happening. She is so smart, and damn that is just so hot. It doesn't hurt that she is good looking as hell.

This is so weird. I feel like I was BUSTED for being a creep!!! LOL. I just love smart Jewish girls with interesting noses who can frame an argument. I would bet she's got the cutest little beaver too - I mean, in her creek behind the house where she lives. What did YOU think I mean't - huh?

Naomi is hot! I like the smart ones. She gives me a brain-on. Ungh! I want to kiss your mouth, Naomi.

She is the sexiest communist in the world right now.

nice posting.. thanks for sharing.

she is hot!!! And she has a brain. All I need from this world. Wish her success.

1.I had been a big intellectual fan of her since NoLogo (and by that time the Shock Doctrine had almost a mythic work)but then I saw her visually for the first time in The Corporation and became a fan of a different type.
2.I searched the infamous phrase specifically to find a post like this.
3.What is with the critics in the comments? Seems like one would not search for her in such a way if one did not admire her...
4. Naomi Klein needs to see this page and respond;it would be very interesting.

Nice post. I was checking continuously this blog and I'm impressed! Extremely helpful info specifically the last part :) I care for such information a lot. I was seeking this certain info for a very long time. Thank you and good luck.

Here is my weblog :: diets that work

Yes, I searched. That brain of hers is mmmfffffffffmmmmmmm.

easily the sexiest woman on earth

Haha I'll admit, I typed in Naomi Klein is hot. She is! And she's adorable.