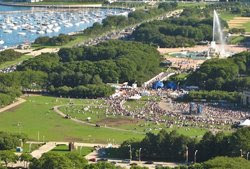 Barack Obama Is Trying To Kill Me
Why is Obama trying to give everyone infarctions?

He not only chose Grant Park in Chicago as the venue for his election night party, he announced it two whole weeks ago. It's a ginormous field with only enough trees to hide, say, a company or so of white-robed Klan members who've had plenty of time to get lickered up and load their dingy old vans with lethal weapons. Just look at those trees--I mean, gee-zus!

He's going to give a speech with lights shining on him, and everyone else is going to be in the dark. Saints and rabbis preserve us.
Posted by MarcLord at 12:29 PM