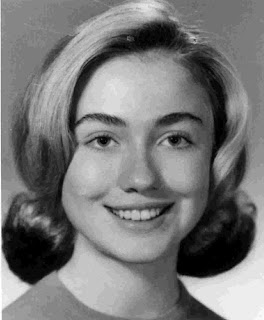 It's Official
Want to know how I knew Hillary Clinton was going to be Secretary of State? Simple. Neither she nor her Big Dog talked to the press for, like, weeks while their misshapen hunchbacks were out robbing graves and urgently wiring all the available electricity down into transducers until it was sucked up and they shouted, "It's a-live, it's alive, it's aliiiiivvve!"

The background is complicated, in an Eyes Wide Shut kind of way. Barack Obama offered the Secretary of Herbal Teas & Bombing to Hillary Clinton, and we early and dutifully passed that information along. But there was a catch, a huge Catch-22, and that's some catch. Her husband Bill has been flying around the globe promoting his Clintonian Global Initiative for the last 8 years on a free-range combination of "Feed the World" and "Air F*** One." So the deal was, he had to turn over the names of 200,000+ foundation donors to the Obama drill-masters, and that's what all the waiting was about.


The salutatorian of my high school got mononucleosis around Christmas, so he had to stay home for a few months, and he wasn't valedictorian because the typing teacher only gave him a B+. I had to listen to him bitch about it for 4 months of my senior year after my stepfather told me he wouldn't pay for Yale or Harvard, not a dime, not even on scholarship. I know what sucks. Even so, it must not have been easy for Bill to knuckle under Arkansas-style.

Bill is still tasked with foreign affairs. Hillary is tasked with a rain-delayed dance in Palestine. Game's on.

As I look at this youthful picture,
as I peer into the windows of her soul,
I wonder
who ate who?

As I ponder the future,
as I study the past,
I see 18 million
chinks in the cieling.

Cielings will be floors,
and floors have been roofs.
Give me the milky way,
That is how the light gets in.

I see she also finagled direct access - no NSA gatekeeper between her and Obama.

"The better to eat you with, my dear." - Wolf, to Red Riding Hood

in comparing her to Talleyrand, Napoleon's foreign secretary, I wasn't joking. She has stature, talent, and her own agenda, and nobody's quite sure what that is.

This will be interesting, hopefully not as interesting as smuggling CIA planefuls of cocaine through Arkansas.

We must not misunderestimate their talent for 'Interesting.'

Great photo. You know she did some paper thingy on Saul Alinsky, too - about the time of this photo. I saw Bill in Rwanda the other day with Paul Kagame while they gazed over into Kivu admiring their boy, Nkunda. I think there is a Chabad Lubavitch Center in Central Africa, too. Yeah, I know there is, Kinshasa. Bill's digging water wells - or something. The last eight years have been rather dull. The next eight will be more nuanced.

As you know, Hill flirted with organizing until her Wellesley friends started getting killed off.

Btw, you should really check out A.Peasants' site, The Twelfth Bough. (And vice-versa.)

To many like me, who are not American, what appealed most about Obama was - the hopes - that he would take a different approach to the Middle East. Not a very different approach of course, as that is just wishful thinking. But slightly perhaps?

I wonder if that is still a possibility ... I know he's still the president, but it's hard to digest that any "change" can come from a lady who spoke about obliterating us ...

On a side note, I've seen this picture before, and I think she looks so innocent and beautiful ... I wonder what happened after ... Or was it just photoshop?

Obama will most definitely take a different approach in the MidEast, and the time is right for one. First, Samantha Power is in charge of the State Dept. transition (anti-genocide, hates Hillary). Next, Olmert signalled that Israel will likely pull out of the West Bank in a remarkable interview yesterday:

I mean, yeah, it's the usual suspects. But leadership and vision trump pretty much everything else.

The hell with Hillary ... but I like the reinstatement of Gate.

And i keep wondering if Suzanne Rice is related to Condy?

Yeah, the Rice connection occurred briefly to me yesterday (but I wasn't serious). So, foreign policy's in the hands of a couple of smart, wonky women. Any idea how they've gotten along in the past?

Susan no relation to Condy; she's more "black elite" than Condy. And yes, Hillary is a long, long way down the Highway to Hell.

Samantha Power had to resign for calling Hillary "a monster" during O's campaign. But, being "an expert" on genocide and the Pulitzer Prize-winning author of 2002's 'A Problem from Hell,' it was an easy call that she'd be back.

I did check them out and I am digging the hell out of them, big time.

Back when I heard that Samantha Power was an advisor to Obama during his campaign, I thought "wow, this guy really is different - how cool is this??"

Hillary: who was it who said "keep your friends close, but your enemies closer?" I suspect that may have been at least part of the motivation in nominating Hillary for Sec State. She may actually do a decent job in that position. If not, well, she can always be replaced.

Interesting blog! Is your theme custom made or did you download it from
somewhere? A design like yours with a few simple adjustements would really make
my blog stand out. Please let me know where you got your theme.

Thanks a lot
Take a look at my webpage :: Traditional Life Insurance

This is the perfect web site for anybody who wants to find
out about this topic. You understand so much its almost hard to argue with you (not that I really would want to…HaHa).
You definitely put a fresh spin on a subject that's been written about for ages. Great stuff, just excellent!

Feel free to surf to my website quantrim reviews

I just couldn't go away your website before suggesting that I actually enjoyed the usual information a person supply on your visitors? Is gonna be again steadily in order to inspect new posts

Ahaa, its nice discussion concerning this post here at
this weblog, I have read all that, so at this time me also commenting at this place.

Hi there, I would like to subscribe for this weblog to obtain hottest
updates, so where can i do it please help out.