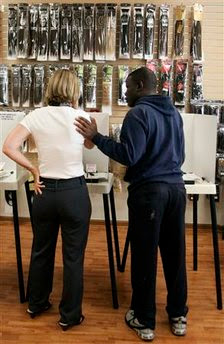 Picture Of The Day
Mary Beth Goring gets a pat on the shoulder from another voter as she is overcome with emotion while voting at the Beauty Market hair supply shop in Inglewood, California. Goring said she never thought the day would come where she could vote for a black president and she became more emotional than she thought she would while placing her vote. (Danny Moloshok/Reuters)
Posted by MarcLord at 12:49 PM

True story. I'm waiting in line to vote and this redneck behind me says, "you votin for McCain"?

Redneck swallows what sounded like a fireball. "White"? he says.

I says, "Yeah, we had 8 years of a white guy and I ain't votin for another one".

One lady was laughing so hard she choked. Remember, I'm in Florida.

vote for a black, you never go back.

Good on ya, mate. I'm on pins and needles.

Plenty of emotion so far today. At the polls at 7:30 this morning, a couple of girls from No-on-Proposition-8 were standing 101 feet from the entrance, offering assistance on the ballot! What a screaming bout of laughter we enjoyed!

And then listening to the BBC this afternoon, relaying messages they had received around the world.

Obama can't save us. But choosing him is the start of saving ourselves.

I think he's carving a backwards "B" on her cheek with his right hand.

I knew this would happen.

he's touching her and not getting hung from a tree. Progress.