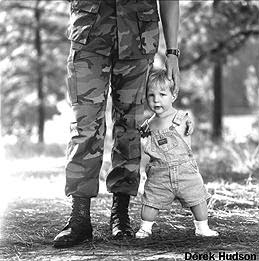 About Time: A First Step In Banning Depleted Uranium Munitions
There are mounting suspicions in the medical community that prolonged exposure to stews of pollutants and toxins are driving up rates of maladies from autism to diabetes. It took 17 years for bureaucrats to finally admit Gulf War Syndrome is real, despite the sufferings of hundreds of thousands of people and their children. Their conclusion didn't link GWS explicitly to depleted uranium, only going so far as to say GWS isn't imaginary.

I suppose the admission is progress compared to the baselines of casual disregard for the effects of toxins and for veterans' rights, but the Pentagon has already turned the world hot with DU, firing an estimated 320 tons of it on Iraq in 1991 alone. They've used it on ranges all over the US, and in live-fire exercises conducted off the east and west coasts, including fishing grounds off Washington State. This is not just a veterans' problem. They're just getting hit with it first.

WASHINGTON (Reuters) – A report released Monday concluded that "Gulf War Syndrome" is a legitimate condition suffered by more than 175,000 U.S. war veterans who were exposed to chemical toxins in the 1991 Gulf War.

The congressionally mandated report could help veterans who have battled the government for treatment of a wide range of unexplained neurological illnesses, from brain cancer to multiple sclerosis.

The Research Advisory Committee on Gulf War Veterans' Illnesses concluded that Gulf War Syndrome is a physical condition distinct from the mental "shell shock" suffered by veterans in other wars. Some earlier studies had concluded it was not a distinct illness.

"Scientific evidence leaves no question that Gulf War illness is a real condition with real causes and serious consequences for affected veterans," said the committee, which has been looking into the problem since 2002.

The committee, composed of independent scientists and veterans, said Congress should boost funding for research on Gulf War veterans' health to at least $60 million per year.

"This is a national obligation, made especially urgent by the many years that Gulf War veterans have waited for answers and assistance," the committee said.

Congress set up the committee in 1998, but the U.S. Veterans Administration did not appoint anyone to serve on it until 2002.

Many Gulf War veterans suffering these symptoms say they met with skepticism when seeking treatment.

The panel found two possible causes: a drug given to troops to protect against nerve gas, known as pyridostigmine bromide, and pesticides that were used heavily during the war.

The panel said other possible causes could not be ruled out, including extensive exposure to smoke from oil-well fires and low-level exposure to sarin gas when captured Iraqi stocks were destroyed.

The U.S. government has spent roughly $440 million on Gulf War health research since 1994, but spending has declined in recent years and often is not focused on improving veterans' health, the committee said.

The report further highlighted inadequacies in the medical care veterans have received from their government.

A 2007 investigation by the Washington Post found combat veterans in the current Iraq war faced rodent-infested housing and bureaucratic hurdles as they sought treatment at the Walter Reed Army Medical Center, the flagship military hospital in Washington D.C..

(I know the picture is disturbing; some genetic effects of GWS are similar to thalidomide deformities. Others are worse, and there are many tiny victims of Desert Storm. Depleted uranium weapons are already banned by every international treaty, law, or convention. Only the United States has used it, and it stays hot for 4.5 billion years.)
Posted by MarcLord at 12:16 PM

What is 4.5 billion years when we borrow trillions 'against the future'? We only owe it to ourselves, or so they say. Whatever that means.

"We only owe it to ourselves,"

We haven't even begun to figure out what that means.

bwah ... boomerang effect. Nature needs to balance itself; and those who think out smart it; well ... uhm ... you say it better

i didn't see the significance of your picture at first ...

How much worse will be the effect on the US's ex-enemies? In catastrophes like this (or to my mind, any casualties of war) we should look beyond partisanship.

I was mindful of the ex-enemy victims, and researched it, but deemed the facts and images too horrific to put here.

This is all very frightening and I am not easily frightened, except perhaps by George Bush.

thanks for dropping in. I'm still wondering when the military is going to come out of denial about D.U. The liability issues are huge, so they incentive is to just keep using it--if they stop, they'll get sued.