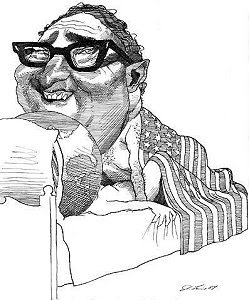 Those Who Study History Are Condemned To Know It
And speaking of Henry Kissinger, he floated a paper ("Seizing Arab Oil") under the nom de plume "Miles Ignotus" (Unknown Soldier) in Harper's back in 1975 about America solving its oil problems by invading Saudi Arabia and seizing its infrastructure. It may not have been his idea originally, since James Schlesinger (Richard Nixon's SecDef) advocated the same thing in 1973, and tried to rev up the sullen British on a joint operation which included Kuwait and Abu Dhabi. Britain responded by making another James Bond movie, but the Gift Zwerg (from german, lit "poison dwarf") never gave up on the idea.

James Akins was the US Ambassador to Saudi Arabia from 1973-75, when he was dismissed for telling Kissinger to perform an unnatural act. He returned to lobby against the planned war, and later personally filed a winning suit against AIPAC which went to the US Supreme Court in 1998.

Akins remarked at the imminent start of the Iraq invasion in 2003, "It's the Kissinger Plan! I thought it'd been killed, but it's back."
Posted by MarcLord at 9:49 PM

It was fashionable for conservatives to bash Jimmy Carter in the latest election. But think about how much better off the country would be if we had listened to him about conservation and alternative energy.

There would be much less of our money going to petro-Terrorists, more money to spend on infrastructure and lower taxes, no troops in harm's way in the Middle East. Instead, in 1980 the country elected a President who removed the solar panels Carter had installed on the White House, a symbol of the Republicans disdain for all things rational

Yes, all true, but he wore a sweater that buttoned in the middle, which triggered the articles of symbolic impeachment.

What would it have taken, back then, for us to follow a different path?

Stop fucking with me. This is starting to get serious. Because what you are suggesting in this post means the other side is much more advanced than they were when I checked right before the commercial break. Next time, wake me up sooner, ya fuckin nimrod.

Who told you to sleep?

The problem with the hydra isn't so much its teeth, it's with all the heads that think alike.