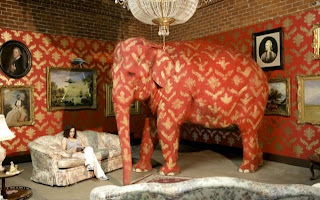 Obama Calls Off Cold War, The Left Fights Over Decor
I'm a guillotine-sharpening skeptic, so have shared in the Left's discomfort at many Obama cabinet choices, especially over the more experienced hands within the Democratic Party. That group, as a group, are either Undead or in need of CPT (cattle prod therapy). But c'mon, what was the Left expecting, Robert Reich for Treasury? Bono for State? On top of the need for power calculus, there has only been one Democratic regime here in the past 28 years, so the menu of experienced choices is prix fixe. If you want organic at this restaurant, you have to raise it yourself.

Even so, when Obama named Rahm Emanuel to be his chief of staff, for example, I asked myself, "Why go through the Deputy Chief of their North American Station? Why not just give your intel to the Mossad directly?" While holding my nose, the angles started to sink in on the choice of Rahmbo for CoS, despite his being the world's only ultra-Zionist ballet dancer (aside from my actual reasons for hating him). But more on these and other oddities in the Cast of Thousands later.

While the Presstitutes and the blogsphere are slathering attention on the staffing, the key to reading Obama is how he sets the framework. That's his M.O., one he became renowned for when he was President of the Harvard Law Review, a signature leadership quality worth serious attention. As you might guess, the students on that Law Review are the most vociferous, ambitious, entitled, competitive people on earth, but they began to appreciate Obama because he could tease out the best from their opposing agendas. In short, because he was more disciplined, open-minded, and rigorous than them. They even began to imitate his moderations in wider social settings, like when going to a movie. Obama Voice: "Do you want butter on that popcorn? Or are you really certain...that you want popcorn at all?" Notice the framework-wrassling in that impression: questioning the basis of reflexive orthodoxies.

A wise person mentioned that Obama "has one chance to negotiate the change in foreign policy direction, with both hands tied behind his back." True, very true, but I wanted to respond in a post, because something of great and hopefully lasting import has already happened. Houdini kept the handcuffs and straightjacket on while they marched him to the water tank only because he'd previously created enough wiggle room to get out. Houdini was all about Framework Control, and Obama's M.O. hasn't changed. The week after his election, he stated any bilateral agreement on the status of U.S. forces in Iraq will have to either be run through Congress, or be deferred for the new administration so it can "negotiate an agreement that has bipartisan support here at home and makes absolutely clear that the U.S. will not maintain permanent bases in Iraq.”

Sounds pretty well-framed to me, but what are the implications--the height, width, and border of that statement? It conveys a not-very-veiled threat to the Bush Administration and its servants to ignore him at their peril. They will pay dearly if they dig a deeper hole, and Bush can't issue pre-emptive pardons. He's also re-limiting Executive powers with words, with nothing more than the force of rhetoric, explicitly declaring the entire Neocon Mid-East hegemonic vision ruined. He has no legal authority, yet Bush, the think-tankers, the minions and even Cheney have taken him at his word so far. And immediately after the above statement a preponderance of Neocons publicly jumped ship.

Why has no analyst, left or right, noticed this: the 2002 Authorization for Use of Military Force Against Iraq Resolution is kaput. One of the first things Obama did was cleave its head in two. No fun new wars with Syria or Iran, no plenary powers bullshit, no grounded undercover Seals pointing lasers and running insurgents, nothing without approval by two-thirds of the Senate. By pulling the plug on permanent bases in Iraq, Obama has switched off a looming Cold War II.

Factor in with the huge coup that's taken place in Congress, with tree-hugger Waxman replacing car-hugger Dingell for the most powerful chairmanship in Congress (Energy Chair), and you've got some clues to the coming agenda and its speed. America's perpetual war powers footing is based on energy paranoia. Energy is the crowbar to change the old framework. There's a lot of plaster around the Old Master, and it is being smashed. You'd think the Left might allow themselves a happy dance or two.
Posted by MarcLord at 5:24 PM

I read that factoid about Obama and the Harvard Law Review on a blog a while back, actually a blog comment. Ever since I've quoted it to friends as a great anecdote that captures why Obama could be a great president.

And, as usual, you are on the case. Good post!

Oh yeah, don't forget to post on Rahm. Maybe he thinks he'll do well for him because he can reason with him, meaning make him see that the U.S. can't exactly do anything for Israel if its falling apart. Maybe even make him see that slowly wiping out the Palestinians isn't the best course either.

Bill Maher said on the Rachel Maddow show the other day that he wasn't going to get after Obama just yet, because he had already proved that he was smarter than the complainers during the campaign. I thought that was good advice.

Obama also knows that he has to have a government up and running day 4. Many potential cabinet picks would take two or three months to get their sea legs. If Obama lets things dwaddle and languish, he will be tried in the press for GWB -- governing while black. Obama understands that for him in racist America there will be no homeymoon.

You know Obama is doing well, because not only is the Left complaining about his cabinet picks, so is the Right. The Right has made snarky comments about the agent of "Change" bringing in lots of former Clintonistas into the Administration. To which I reply, "What part of 8 years of peace and prosperity didn't you like?"

I agree with Jon! The Clinton years were among the best, a stark contrast to the last eight. Perhaps I am overconfident in Obama's ability to do the right thing, but for now I have every reason to believe that this man, while not being able to make us all happy, will prove to be one of the best presidents ever.......

Lord-san,
I must agree that Obama is a very clever politician, and Thank God because he has to negotiate an absolute minefield of decisions. Must think multiple steps ahead. Of course, having been sold out so many times, it's easy to be cynical that he will sell us out. I waffle myself. But then I think:

I think the source for the anecdote might have been Harpers, Vanity Fair, or the NYT, which I somehow wind up reading sporadically.

I've got a post on Rahm mostly written from a couple weeks back. Will dredge up and tweak. And Bill Maher? Good advice, but that bastard owes me money.

signs are pointing to a whirlwind first 100 days. Or Homeymoon.

One good thing learned from the Pugs: they showed the benefits of coordination and message discipline. This will be the first time in our lives or our parents that the Democrats have had it.

We've spent a lot of time studying this guy, and really, what weaknesses have we found? Dude makes good decisions, and when he makes a bad one, he knows how to back away from it. And he's way more leader than that.

When he was in Lieberman's face on the Senate floor, backing him down and not letting his hand go, his body language was saying, "I own you, bitch." But his voice was probably saying, "Look, Joe, you've got to stop these meaningless flirtations. We need you back in the party, and we've got a role for you."

Is that a P-51 Mustang you're standing in front of, or are you just happy to see me?

The paradox of politics. As in, he won't sell us out. But to get anything done, he has to look like he's selling us out.

Well, actually I *am* happy to see you, but I am standing in front of a very shiny airplane called "Miss Hap." You had to be there...

And you state the paradox perfectly.

Thanks Mike!
What a great, great piece ...

That was a great piece, and after all the hand-wringing from the Alter-Net email newsletters I get, this piece was an excellent rebuttal to all their negativity. They give Obama zero credit, and I'm about ready to unsubscribe. I'm with you, he's smart enough to take this bunch and whip them into shape. Wall street seemed pretty happy with his economic team picks today. That's definitely saying something. So far, he has not picked anyone who has made me flinch. Heck, I was thrilled when one of the first things he said what that Gitmo will be closed. Smart, smart move. All hail the chief, we finally got us a smart'un.

Thanks, Pedestrian, and for stoppin' by!

While recognizing what they're saying is often valid, I'm often not "with" the Left. They are wonderful at identifying the objectives, but tend to suck at plotting out the intervening steps required to move there. Yet excel at whining.

It's possible to be an idealist, and a realist.